The stamps and postal history of Australia can be divided into two periods: before 1913 with ‘Australian States’ stamps issued by the Australian colonies of Great Britain and after 1913 when the newly formed Commonwealth of Australia introduced stamps inscribed ‘Australia’.

To showcase this new level of independence, a kangaroo was incorporated into the design of the first Australian postage stamps, within the outline of Australia. 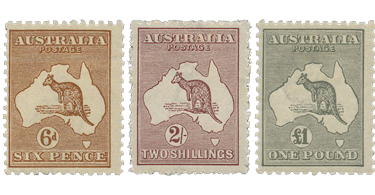 History of the ‘Roo and Map’

The controversy of the Kangaroo and Map stamp

The Kangaroo and Map stamps provoked much controversy upon the issue. The acting government was accused of being unpatriotic and anti-British, because of the missing image of the monarch. The straightforward design was mocked by the press and people involved in the design process were slandered.  Some of the contemporary quotes were:

‘Our postage stamps go all over the world; they become, in the course of time, a sort of national symbol; and it is therefore very annoying to find that our country is to be represented in the eyes of the world by a grotesque and ridiculous symbol, and that she will be a laughing-stock even to childish stamp collectors of every nation.’ (Argus, Melbourne, April 1912)

‘Many clever draughtsmen contributed designs, and the result is forthcoming, it has been printed – it is as dull, flat, ugly and brainless as the dullest bourgeois could desire. (…)The result is simply childish; it represents a child’s tastes, a child’s mind.’ (Punch, Melbourne April 1912)

After this rocky start, Kangaroo and Map survived and thrived. It became one the most enduring stamps in the world with over 35 years in circulation, successfully outlasting its critics and becoming a national icon. 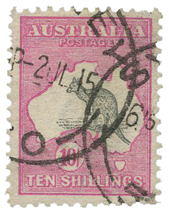 Collecting the Kangaroo and Map stamp

Below are some interesting ways in which you can start your Kangaroo and Map collection:

Colours: These stamps are known for their interesting colour varieties. The easiest way to start with Kangaroo and Map stamps is the 1d carmine stamp. Starting from 1d carmine, you can look for all the different colour shades and continue onto larger denominations.

Plate flaws: Known for a number of plate flaws, such as large retouches, these stamps can provide an entertaining challenge for a lifetime.  The most popular flaws are the 2½d ‘Missing Fraction’ (caused by ink-clogging) and the 6d ‘Broken Leg’.

Cancellations: Circular datestamps are interesting to collect: a starting point could be finding issues postmarked in each month of 1913, their first year of issue.

Perfins: Stamps featuring OS (Official Service) government perfins are an interesting area of collecting Kangaroo and Map. Perfins vary in sizes and stamps with well-centred ones are particularly hard to find.

Watermarks: If you are collecting Kangaroo and Map stamps from throughout the period of the design’s use, until 1946, make sure to check the watermarks. Their varieties can make a huge difference in the value of the stamp. 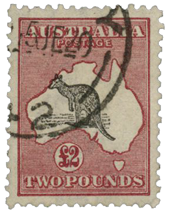