Our next sale contains a most extraordinary item: A cover which travelled 10,000km around the British empire by sea, from Malaysia to Mauritius in 1854, just four weeks after the first stamps were issued in Malaysia.

It is a cover which is the joint earliest recorded from Penang, which has never before appeared on the philatelic market and can be traced 166 years back to its original recipient.

In any other case, just one or two attributes from the above list would produce an item of enormous philatelic interest- the fact that this item encompasses all of them together elevates the cover to a showpiece of the highest importance and rarity.

The 1854 date of the cover is thirteen years before the Colony of the Straits Settlements received dedicated issues, but the area was under the governance of the East India Company at the time- who sent out a general issue of postage stamps in October that year, for use in Singapore, Penang and Malacca the first three British Settlements in the area. The letter was sent on the 18th November, just four weeks after Malaysia received its first-ever stamp issue, and is the joint earliest stamped cover recorded from the Settlement of Penang. 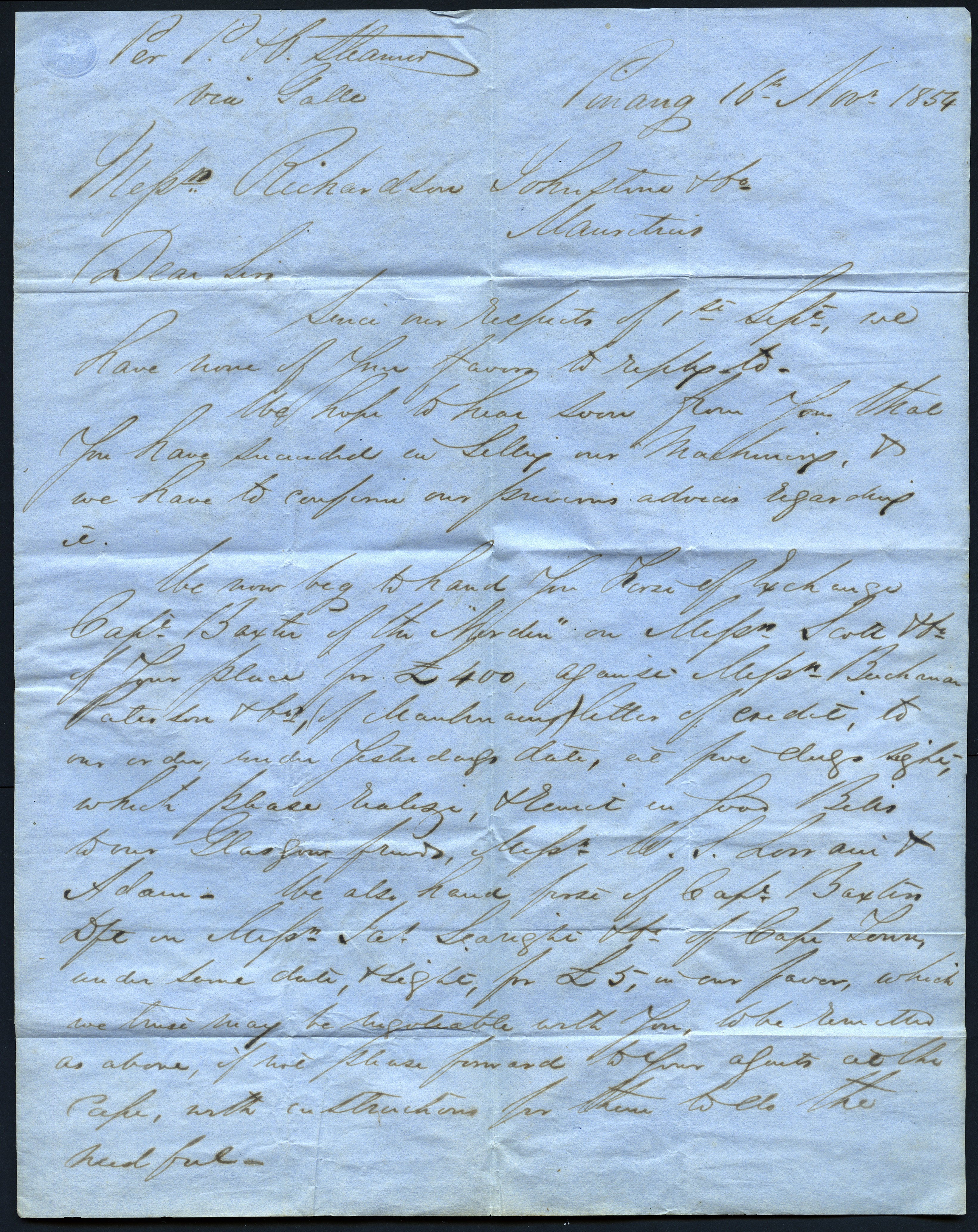 India Used Abroad material from Malaysia from 1854 is excessively rare, with few recorded items known, and in this case, the combination of stamps used is unique, the high 20 anna rate charged as a result of the extraordinary distance travelled (well over 10,000km), combined with the note which finished the letter “We enclose two letters to Messrs Scott + Co Port Louis, having reference to Captain Panto(?)’s draft on them of £400, which please hand to them”-the two additional letters adding significantly to the weight.

The cover set off on its epic 11,000km journey aboard P&O steamer S.V. Malta, which travelled via Bombay, India, and Galle, Sri Lanka, then onwards to Mauritius, arriving just four weeks later in Mauritius, shortly before Christmas on 20th December.

Remarkably, all the stamps but one were cut from the sheet with large margins on all sides- a very rare occurrence. The cover not only survived its epic journey in fine condition, but the fact that it retains remarkable freshness of colour and extraordinary visual appeal to this day is down to its history.

It can be traced back to its first recipient in 1854 and has been owned by his descendants ever since. 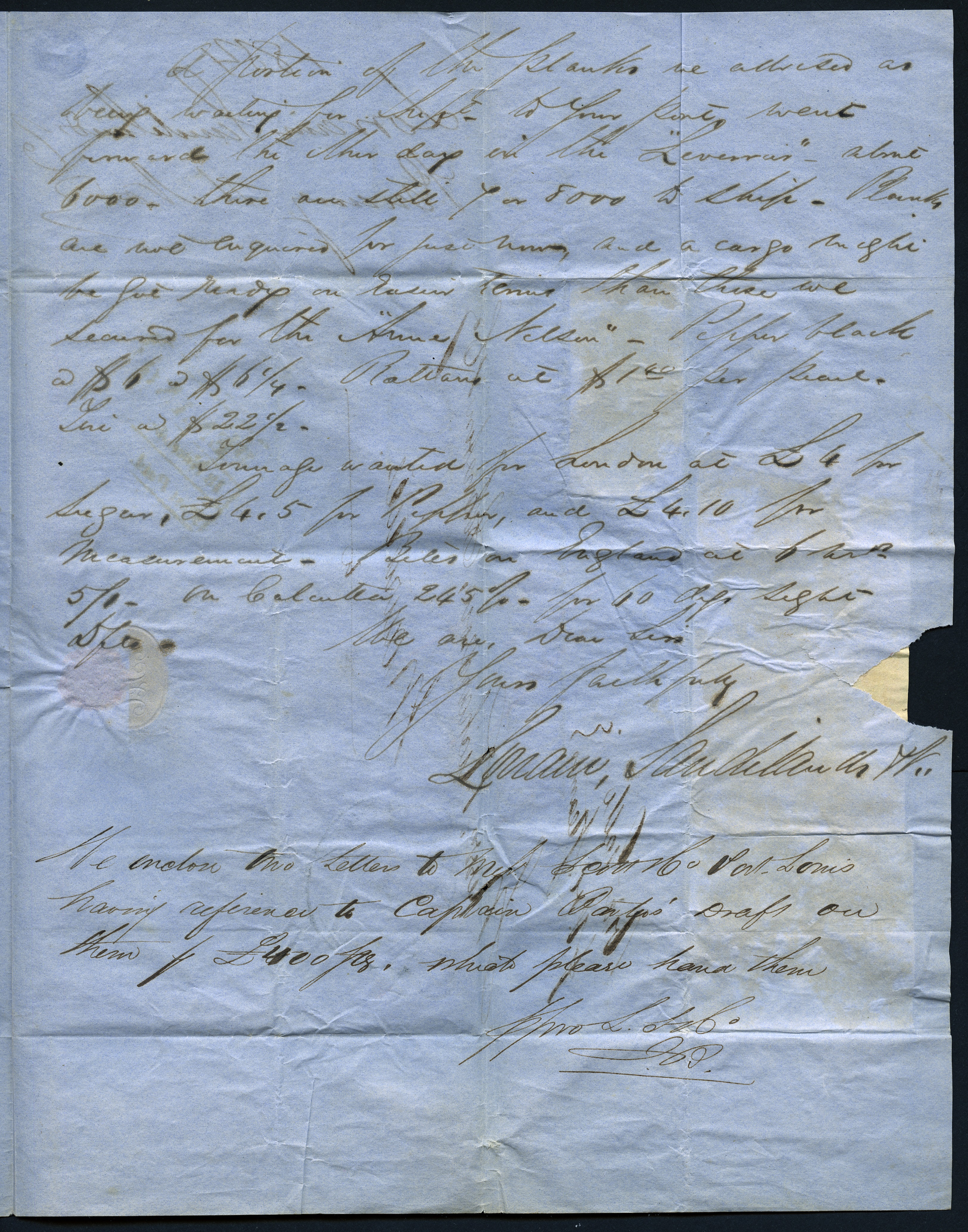 It was almost certainly received by John Gilmer (1821-1897), who sailed to Mauritius in 1842 to operate a Sugar Plantation called “Deux Bras”, near Rose-Belle on the South East of the island. The Gilmer family had close professional and marital ties to the Richardsons, International sugar merchants and traders based in Scotland, who are the addressees of the cover.

John Gilmer’s nephew Arthur Dron Gilmer (b.1853) sailed for Mauritius in 1880, where he managed the Deux Bras plantation for 9 years, before returning to Scotland in 1889, where he started his own confectionery business, before emigrating to Canada in 1925. The cover has remained in the possession of his descendants in Canada ever since, nestled safely in the family archive, and as a result, has never before been offered on the open market.

A once in a lifetime to own this item of the highest importance to both Malayan and Indian Philately.