An introduction to stamps of India

Much like the country itself, the philately of India is wonderfully diverse, endlessly fascinating and readily accessible to anyone willing to explore. It's also a vast area and can seem very daunting to a novice collector, or anyone looking to move into a new collecting area.

The first Indian stamps, indeed the first stamps in all of Asia, were the fabled 'Scinde Dawks,' three stamps, each of ½ anna value, issued in 1852 for local use within Sind province. 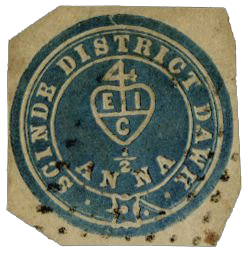 These stamps rank amongst the most desirable of all 'classic' issues, not only for their rarity but also because of their unusual method of production, being embossed either colourlessly ('white'), in blue ink, or on a red sealing wax wafer.

Stamps for the whole of India followed in 1854 and included one of the world's most iconic stamps, the 4a blue and red. Stamps printed in more than one colour were still highly unusual in 1854, even more so in such contrasting colours as red and blue. The desirability of the 4a was cemented when an example was discovered with a blue portrait of Queen Victoria inverted in relation to the frame! 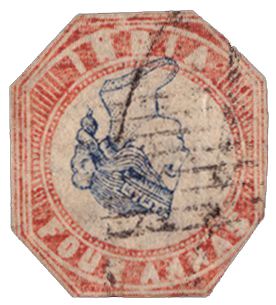 Today, more than 150 years later, there are still only 28 examples of the 4a 'Inverted Head' known to collectors.

The classic period of Indian philately ends with the suppression of the Indian rebellion of 1857, after which the British Crown assumed direct administrative control of India from the British East India Company. Between 1860 and 1902 various stamps were issued, all featuring a portrait of Queen Victoria who would later assume the title Empress of India in 1877, and printed by De La Rue using typography. These stamps make an excellent first foray into Indian stamps, as they are generally cheap and readily available and can be built up to form quite a specialised collection. 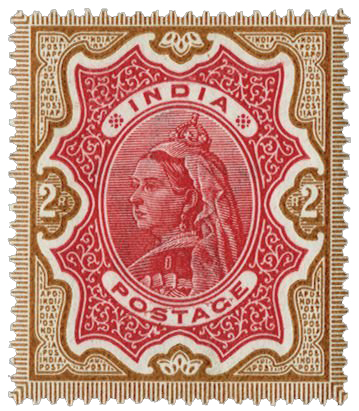 This period includes the wonderful 'Angeli' high-value stamps issued in 1895, so-called because the design featured a three-quarter profile portrait of Queen Victoria by the noted Austrian artist Heinrich von Angeli.

Somewhat surprisingly, given India's status as the 'Jewel in the Crown of the British Empire', the stamps of King Edward VII re-used the designs that were in use toward the end of Queen Victoria's reign, albeit with a changed portrait. Nevertheless, this remains a handsome set with a wide range of colours to catch the eye and it includes the first Indian postage stamps to have face values of more than 5r. 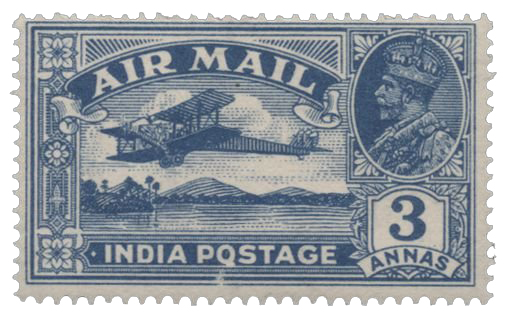 Along with the usual 'long' sets of regular definitive stamps (issued in 1911-23 and 1926-33), the period of King George V saw the introduction of India's first commemorative and pictorial issues. The first of these, issued in 1929 for use on the newly inauguration airmail letter service, features as the main design element a picture of a de Havilland DH.66 Hercules aircraft, as used on the new airmail routes. It can be somewhat of a challenge to find each of the six values in the set correctly used on airmail cover to pay for the service they were intended for.

Commemorative sets for the Inauguration of New Delhi (1931) and the Silver Jubilee of King George V (1935) followed and were the forerunners of what would become the 'special' stamp issues of India today. 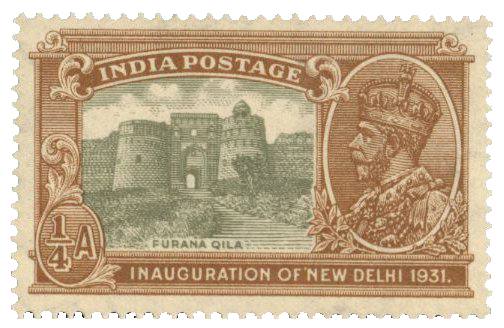 These pictorial stamps clearly made a favourable impression, as the King George VI definitive issue of 1937-40 included no fewer than eight such designs, quite a radical departure from what had come before.

In 1947 India became a Dominion within the British Empire, and two years later a fully independent Republic. For many, 1947 represents the start of 'modern' India in terms of stamp collecting. The stamps of modern India are printed in enormous quantities; Indians still write many millions of letters every year and are probably the world's biggest users of postal stationery. Indian stamps have great variety, and modern stamps are still avidly collected and discussed by the collecting fraternity in India.