One of the most interesting periods in Canadian postal History came after the provinces of Canada first issued postage stamps under the aegis of the General Post Office in London. The post office general in London issued regulations in place to ensure the effective “killing of the stamps” to avoid reuse.

The Canadian Confederation, which united three colonies Canada, Nova Scotia, and New Brunswick, and the expansion of postal services across the British Commonwealth, led to the introduction of Fancy Cancels.

The need for Fancy Cancels

Since the world’s first postage stamp was issued, General Post Office have seen various attempts to reuse stamps either through cleaning the cancellations off or by marrying stamps that have escaped the attention of authorities. However, the main need for Fancy Cancels came when postage regulations between the former colonies of the Canadian Confederation contradicted each other.

The regulations concerning the postmarking of envelopes, i.e. first-class mail, at the time of Confederation may be summarized. The item was to be postmarked in the lower-left corner with the date and name of the forwarding office. If the office had not been issued with a suitable datestamp it was to be done in manuscript.

Adhesive postage stamps were to be obliterated with a ‘killer’, not the datestamp. If no such killer had been issued to the office, the postage stamp was to be cancelled with a pen and ink cross or by a suitable ‘killer’ provided by the postmaster. The office of destination had to record its arrival with its datestamp or in manuscript.

As has been suggested, the reason postage stamps were not to be cancelled using a datestamp was if that was the only postal marking on the front of the cover and the adhesive was removed, the record of the item’s time in transit would be lost. Obviously, it would take little effort to bang the canceller down twice, once on the stamp and once on the cover.

The problem was that in poor light faint cancels on previously used stamps might not be noticed. It was not until 1894 and the advent of electric light that this was no longer considered a problem and in April of that year the use of circular datestamps as cancellers was permitted. It is of interest that failing everything else it was permitted to use pen and ink as a ‘killer’.

What is a fancy cancel?

A question sometimes posed is ‘What constitutes a fancy cancel?’ Should it be confined to ‘homers’ or is it legitimate to include official postmarks like the Ottawa Crown, the misuse of devices such as rate markers, the brass seals used to secure mailbags, or even straight-line markings, which clearly could not have been whittled out of cork or wood or even made up from rubber letters. 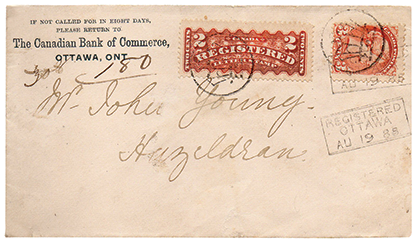 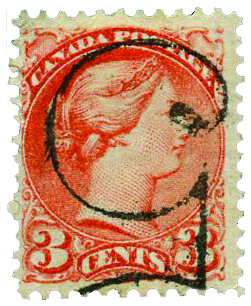 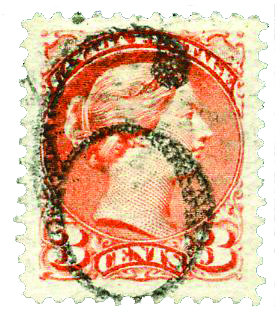 Examples of the misuse of rate markers to cancel stamps 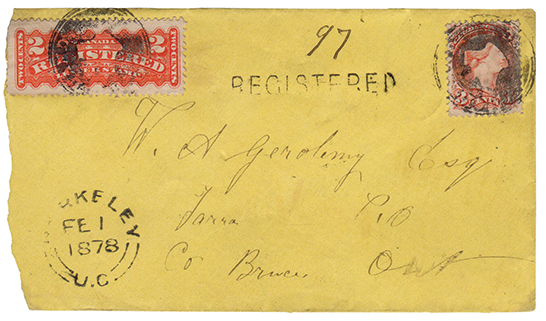 Registered cover with a 2c. registered mail stamp and a 3c. stamp both cancelled by a brass seal intended for use on mail bags

My own view is ‘why not?’ But like all things, what one decides to collect, or include in a collection, is entirely a matter of personal choice.

The downside of collecting fancy cancels is the simple fact that even when quite scarce items could be picked up for a song (unfortunately no longer the case), fakers found it profitable to ‘improve’ otherwise uninteresting items.

Indeed, the most prolifically faked cancel is the aforementioned Ottawa Crown. Curiously, such are the peculiarities of collectors, the fakes now seem to command more or less the same prices as the genuine.

How to avoid forgeries of Fancy Cancels

As far as the generality are concerned, there are several points to look out for.

First, has the stamp evidence of another postmark underneath the fancy cancel? If so, be suspicious. Second, does the ink look right? Indian ink was not used in post offices to cancel stamps. 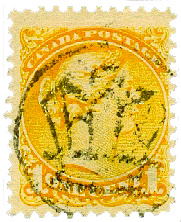 A faked Ottawa Crown cancel on a 1c. This is the most prolifically faked ‘fancy cancel’

Third, if it does, is it ink or watercolour? To test, it is probably unwise to immerse the item in a bowl of water unless one actually owns it; if one doesn’t, it might be a bit tricky dealing with the vendor. Moisten the tip of one’s little finger and gently rub over a small part of the cancel. If it starts to fade, return it to the owner with the suggestion they immerse it in water for a while. Particularly if it is a cover!

Finally, do not be overly worried if you do occasionally buy an item that turns out to be dodgy, it is part of the learning process and the cost may be regarded as part of the fee!

Fancy cancels made by postal officials fall into several groups. The most prolific are simply crosscuts on a generally round background, most likely made from cork, which includes cogwheels, sunbursts and arrowheads.

Next are letters, monograms and town names.

Third are leaves, particularly maple leaves, which is not surprising, and plants.

Fourth, crowns, stars, crosses and similar devices such as masonic insignia, anchors and the like.

Sixth, miscellaneous items such as the curious Nicaragua Arms cancel used by the St Genevieve de Batiscan, bogey faces and the like.

In 1869 main post offices were issued with two-ring numeral killers, starting from ‘1’ in order of importance down to ‘60’. ‘1’ was issued to Montreal, ‘2’ to Toronto,’3’ to Quebec and so on. Many main offices were also issued with duplex cancellers. 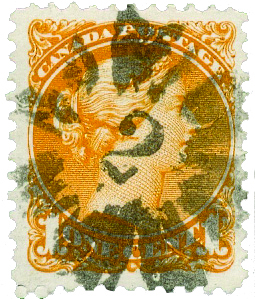 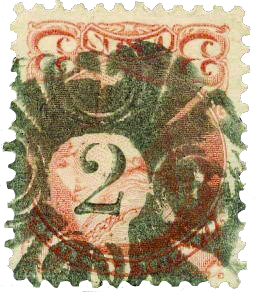 Toronto in time, including sub-offices, had something over 100 cancellers over the course of the 30 years to 1900, so one might suppose such offices did not also make their own cancelling devices, but one would be wrong. There were a number of home-made fancy ‘2’s made by Toronto clerks.

Fancy Cancels are sometimes called “corks,” suggesting that these cancelling devices were made from the stoppers of bottles from which the spirits had fled.

While there is no doubt that many of the home-made cancelling devices used were made by postmasters from cork, equally devices used could be made from rubber, wood, metal, signet rings or even from what came readily to hand.

Quite a number of other offices which had official two-ring cancels also used home-made cancels. Just occasionally, even a year date was carved into the design.

The generic name ‘corks’ applies to a considerable number of different types, generally. They are not always round in shape and can be cut into various patterns which can be simple, complicated or somewhere between the two. Naturally, unless on cover, one has no idea which office used which device was used. 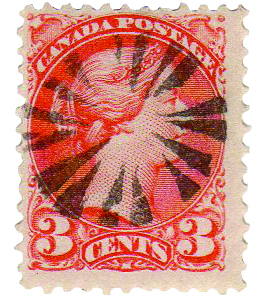 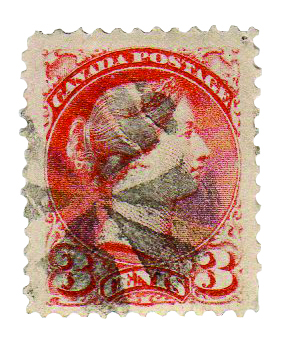 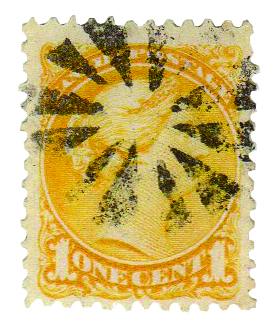 The end of Canada’s Fancy Cancels

The heyday of the fancy cancel was really over sometime before changes in postal regulations allowed the use of the post office’s circular datestamps as a canceller, instead of a mere record as to when the item was posted, a regulation that had been applied with vigour only to first-class mail. But a new development was about to be introduced that helped to complete the fancy cancel’s death knell— the rapid cancelling machine and the resultant machine cancel. 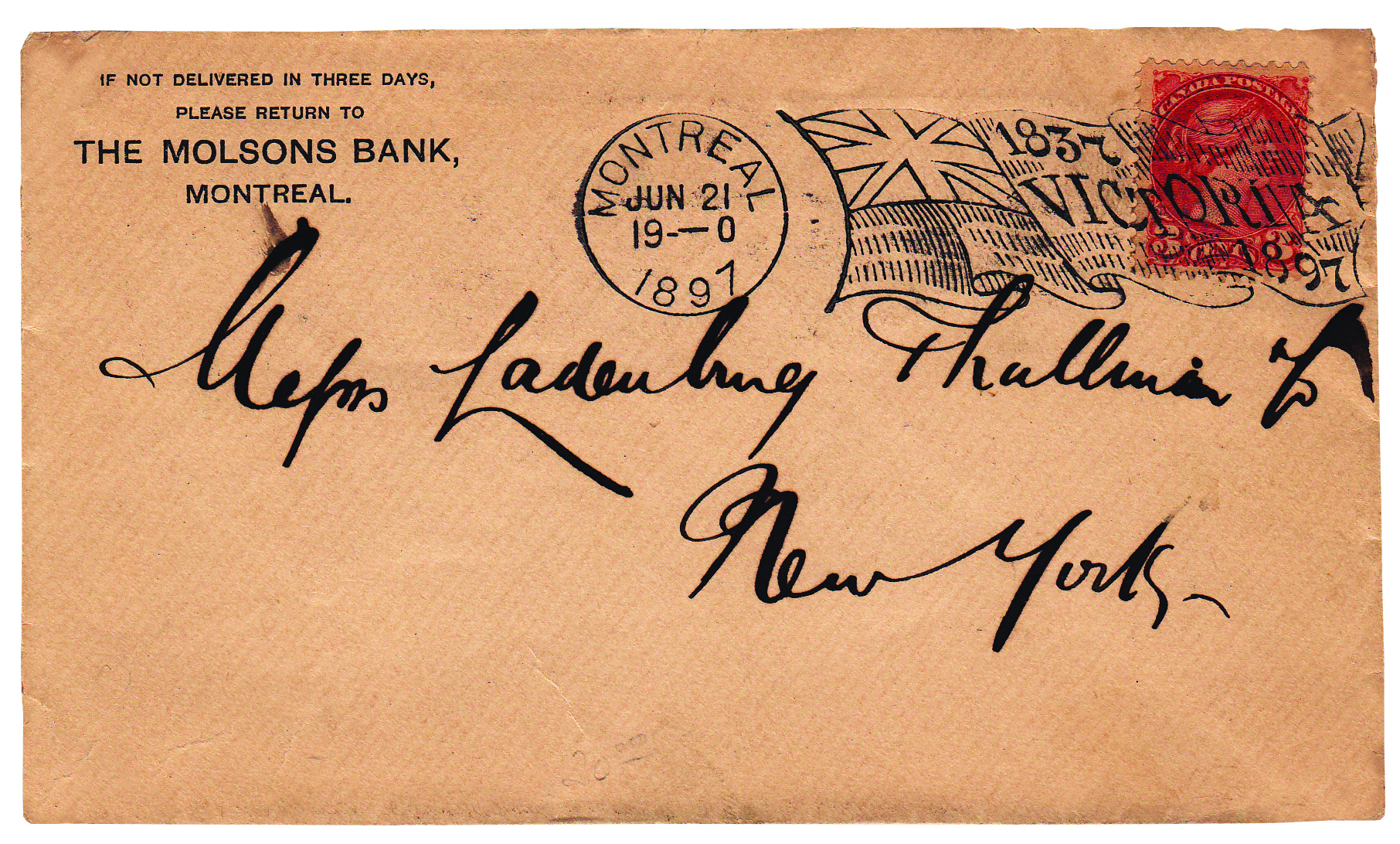 An 1897 jubilee flag machine cancel from Montreal. It was machine cancels like this which finally led to the death of the fancy cancel.