One of the attractions of stamp collecting in the past was that it took you to places you would probably never have the chance to visit in your lifetime. As pictorial stamps grew in number, it was possible to have glimpses of people and places in which dreams were made. Today life is different. The ease of travel has made the world smaller and the dreams of the past have become reality. Now the stamp collection need not be a fantasy based on aspirations: now the reason for a collection can be to rekindle memories of a place that has been visited, and people that have been met.

Australia can be a land that meets both criteria: the distance might mean it is still on the bucket list as a place to visit, or it can be a country that brings back so many happy memories – perhaps with a wish to return, the vastness offering much to explore and enjoy. 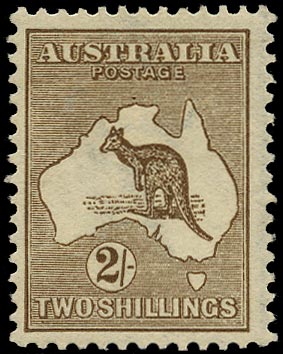 Back in 1913, when the Commonwealth of Australia issued its first stamps (the various states that constitute Australia had previously had their own separate stamp issues), the map of the country was probably not familiar to all. Similarly the kangaroo: is indigenous to Australia and New Guinea, and then possibly not seen by many, even from drawings or photographs. There on the first stamps of Australia appeared the kangaroo, on a map of Australia. These stamps continue to be popular with collectors. 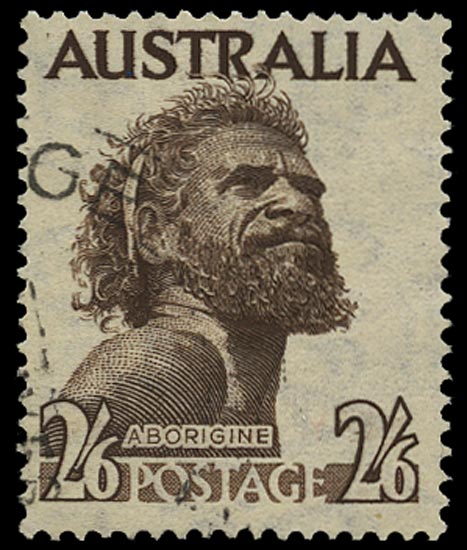 Australians today are very respectful of their Australian Aboriginal ancestry, peoples who are thought to have come from Asia some 65,000 to 80,000 years ago. An Aborigine first appeared on an 8½d definitive stamp of Australia issued on 14 August 1950. The same design would subsequently be used for a 2s.6d stamp, first released on 19 March 1952 with a watermark of a Crown and ‘C of A’ seen sideways on the stamp. Examples with the watermark reversed, that is with the Crown to the left of ‘C of A’ when viewed from the back of the stamp are very rare. Later, the stamp would be issued on paper without a watermark. 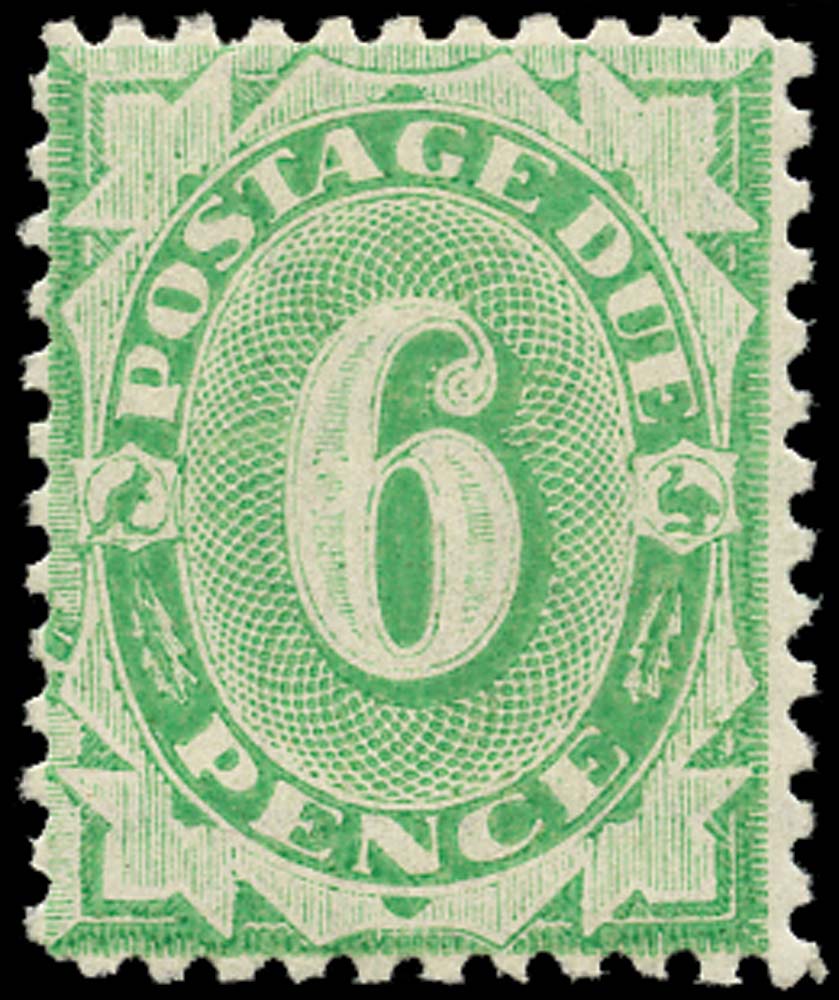 Although the first stamps for the Commonwealth of Australia were issued in 1913, it is worth remembering that federal control of postal services throughout Australia took effect on 1 March 1901. This has a bearing on the postage due stamps, normally the more mundane of issues. The first postage due stamps for Australia did not, in fact, including the country name, just inscribed ‘POSTAGE DUE’ with the denomination. The first series of stamps, issued on 1 July 1902 in values from ½d to 5s, were printed on paper with a watermark of a Crown and the letters ‘NSW’ (New South Wales). Slight changes to the design and perforation, plus additional values, followed. In 1906 the watermark was changed to the ‘Crown over A’ design. 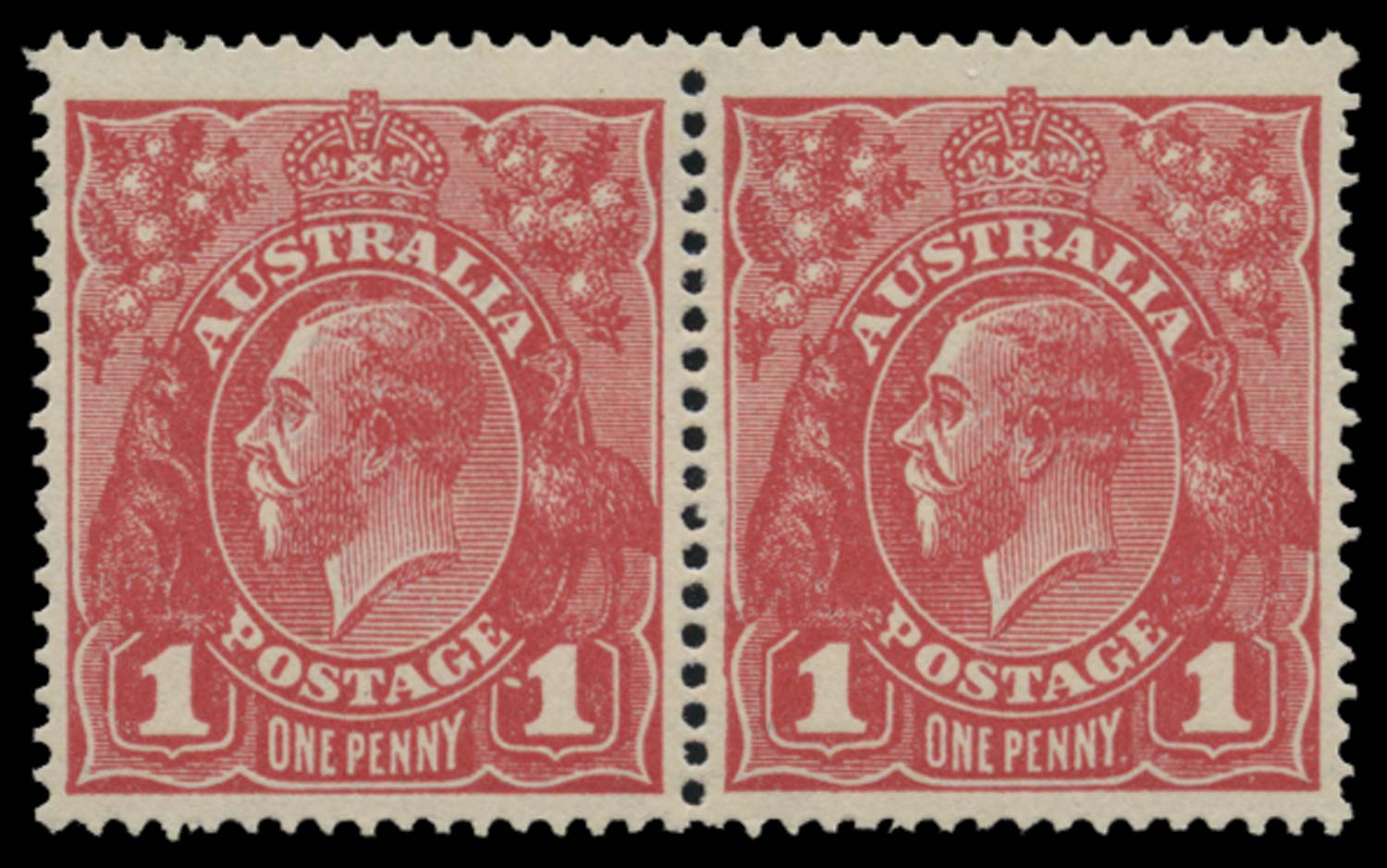 Returning to the postage stamps, the ‘Kangaroo and Map’ design was joined by a design with the portrait of King George V, the first value – 1d – being issued on 9 December 1913. This initial stamp was printed on paper without a watermark, but would soon re-appear with a watermark of a Crown surmounting an ‘A’, while additional denominations were added. Indeed, the King George V stamps definitives offer immense scope for study, with variations to the watermark, mainly affecting the look of the Crown, changes of the perforation measurement, and differences in the paper used.

Any study is certain to include varieties. Particularly unusual is to find a joined pair of stamps, each stamp showing one of the known constant varieties. Such is the case of the 1d carmine, as released on 10 December 1919, printed in typography by T. S. Harrison and having perforation 14. The pair of stamps, stamps 3 and 4 from row 4 of the sheet, show the variety of a dot before the ‘1’ on the left-hand stamp, and a ‘thinned left frame’ on the right-hand stamp. 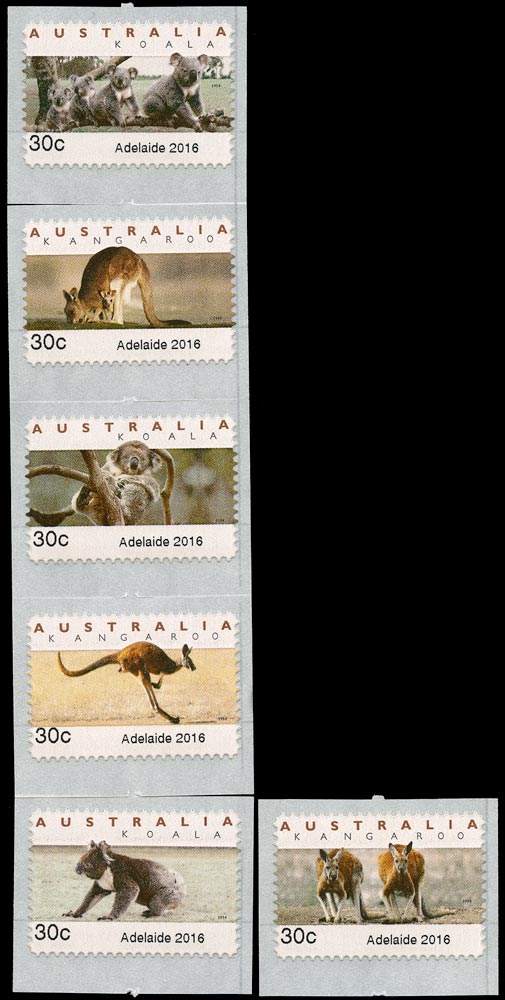 Leaving the initial stamps, a look at a modern Australian rarity. Many years ago Australia made available counter-printed stamps, the denomination printed on the stamp at the time of purchase: in more recent times these stamps have been self-adhesive. On 4 January 2016 a postal rate increase from 70c to $1 came into effect in Australia. The post office at Adelaide found itself short of 30c stamps to use as make-up values. As a consequence, counter-printed stamps, in six designs depicting Australian kangaroos and koalas, were produced with a value of 30c, each being additionally printed with ‘Adelaide 2016’. These stamps were distributed to post offices in South Australia from 5 January until 8 January, when fresh stocks of the normal 30c stamps were received. The base stamps were produced in strips of five or ten, making it extremely difficult to find strips of all six designs joined together. Understandably these stamps command very high prices. 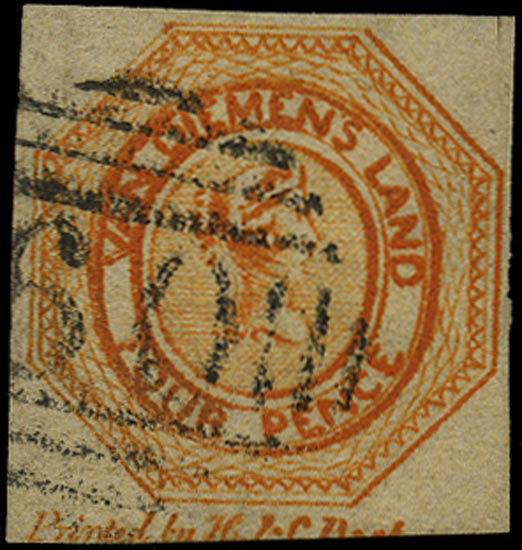 As mentioned, before stamps were issued for the Commonwealth of Australia, each state issued its own stamps. One such was Tasmania, whose first stamps, inscribed Van Diemens Land on the stamp, were issued on 1 November 1853. There were initially two values, 1d and 4d, both of crude design, with printing undertaken by H. And C. Best at the Courier newspaper based at Hobart. For the 1d value, at first the printing, using the recess process, was clear and well defined, but soon deteriorated, becoming blurred and worn. The same was true of the 4d value, at first clear, but later looking worn and blurred. One example, used at Launceston (indicated by the numeral ‘60’ in the cancellation), comes from Plate II, showing course engraving, with the background being thicker and blurred. However, the particular example shows part of the imprint ‘Printed by H. & C. Best’ below the stamp, making this a very attractive stamp. 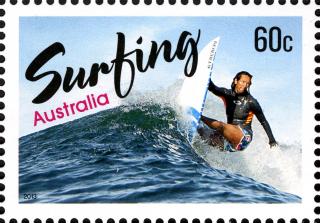 For those for whom a holiday in Australia has become a reality, perhaps there was time for some surfing – or at least watch others surfing. It was the subject of a set of stamps issued on 12 February 2013 to mark the 50th anniversary of Surfing Australia.  There were four stamps at 60c, showing: women and surfboards; a poster of a surfer and the shore; a van carrying surfboards; a surfer on the crest of a wave. The designs were issued in se-tenant blocks of four in sheets with normal gum and in the form of a miniature sheet. The four were also available in a prestige stamp booklet titled ‘Surfing Australia’ that sold for $24.95, the booklet containing panes of four for each of the separate designs, plus a se-tenant pane of four. However, the four designs were also available in the self-adhesive form, issued in horizontal rolls of 100 stamps, the four designs being printed in sequence. The self-adhesive version was also available in booklets, again titled ‘Surfing Australia’, sold for $6 and containing a pane of ten of the stamps. Stamps reveal why many want to visit Australia. 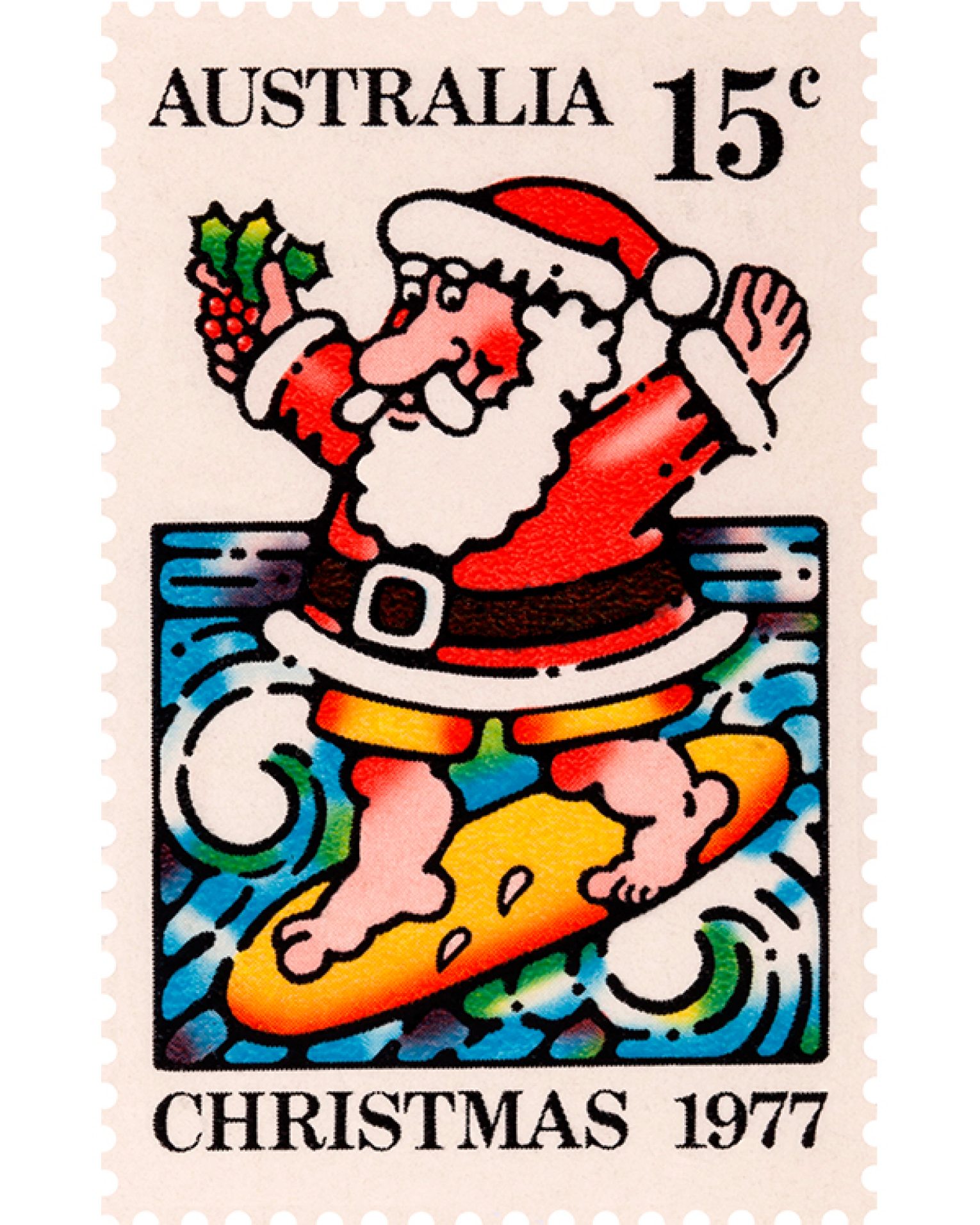 Unfortunately, the theme of surfing hasn’t always gone down well with our friends down under. In 1977, Australia Post got into deep water when it produced a 15c Christmas stamp for the domestic greeting card rate which depicted a surfing Santa. The secular design by Roger Roberts would go on to become what is probably the country’s most controversial stamp issue.

Australia’s first secular Christmas stamp, showing a koala, Christmas tree and seasonal decorations, was issued a year earlier with a face value of 45c for the air letter rate and was well received. It was issued alongside a 15c value for domestic mail which depicted the traditional religious theme of Madonna and Child. A year later, when faced with having to use a secular stamp on their domestic Christmas mailings, the Australian public was in an uproar. In fact, the issue generated more criticism than any previous Australian stamp, with letters appearing in daily newspapers and complaints pouring into Australia Post.

It was to be 1979 before secular designs made a tentative reappearance on Australia’s Christmas issues. 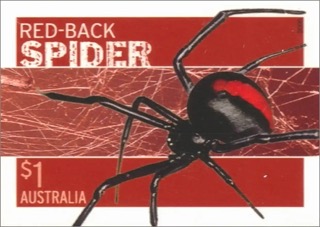 The theme for this series of stamps is to showcase some of the most dangerous animals in Australia. The infamous $1 Red black widow stamp came as part of the collection of some of the most dangerous predators down under, such as saltwater crocodiles, great white sharks, and yellow-bellied sea snake. The stamp was included as a semi-imperforate miniature set. This set was only partly perforated, thus creating stamps which were imperforated on two or more sides. Issued in 2006, it only saw a limited run due to being similar in size to the real red-black widow, scaring some eager philanthropists. 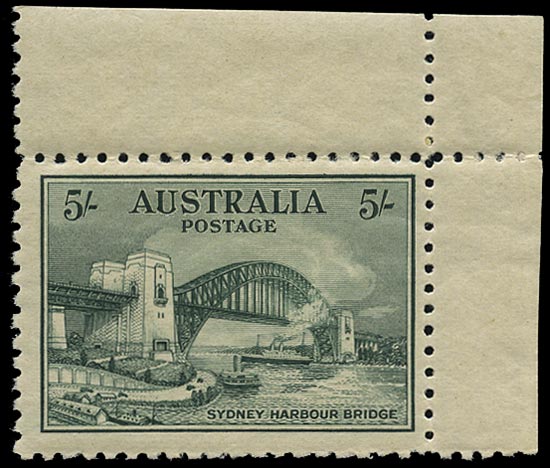 No line up of ‘Uniquely Australian’ stamps would be complete without mention of one of the country’s most famous structures – the Sydney Harbour Bridge. Spanning 503 metres, this stunning piece of engineering remains the largest steel arch bridge in the world and has impressed visitors ever since it was officially opened in 1932. To commemorate that opening, on 14 March 1932, Australia Post issued a set of three stamps (2d., 3d and 5s), all of the same design, depicting the bridge in all its glory. The design was by R A Harrison and the engraving by F D Manley. The stamps were recess printed by John Ash on unwatermarked paper and perf. 11. The 2d value was also printed by letterpress on watermarked paper and perf. 10½. However, the key item of the set is the elusive 5s. blue-green, mint examples of which often command prices in excess of £500 when they eventually come up for sale.