Collecting by theme: Ships on stamps

In this series, we explore collecting stamps by different subjects, presenting a few of the most interesting stamps through history. For this blog, I have selected a nautical theme as I love sailing. I find stamps with ships particularly beautiful in their artistic execution and interesting in the variety of vessels depicted.

Grenada is an island country in the British Commonwealth, in the south-eastern Caribbean Sea. Its postal history began in 1858 when stamps of Great Britain were introduced and used in Grenada, depicting Queen Victoria.

However, it is not until 1906 that an interesting ship appears on the stamps with the motto CLARIOR E TENEBRIS. The motto can be translated as ‘From darkness to the light’ (Brighter from the obscurity).

The inspiration for this composition came from the badge of Grenada from late 19th century, featuring the ship La Concepción of Christopher Columbus who is considered to be the first European to discover Grenada in 1498.

He sighted Grenada during his third voyage and it is argued that he named it 'La Concepción' in honour of the Virgin Mary and his ship. The ship was also featured on later issues in 1934, 1938, 1951 and 1953, on its own or flanking a portrait of the monarch.

With the more contemporary issues of Grenada stamps, the penchant for ships is shown particularly in 1976 tourism series and 1976 American Revolution 200th commemorative issues. 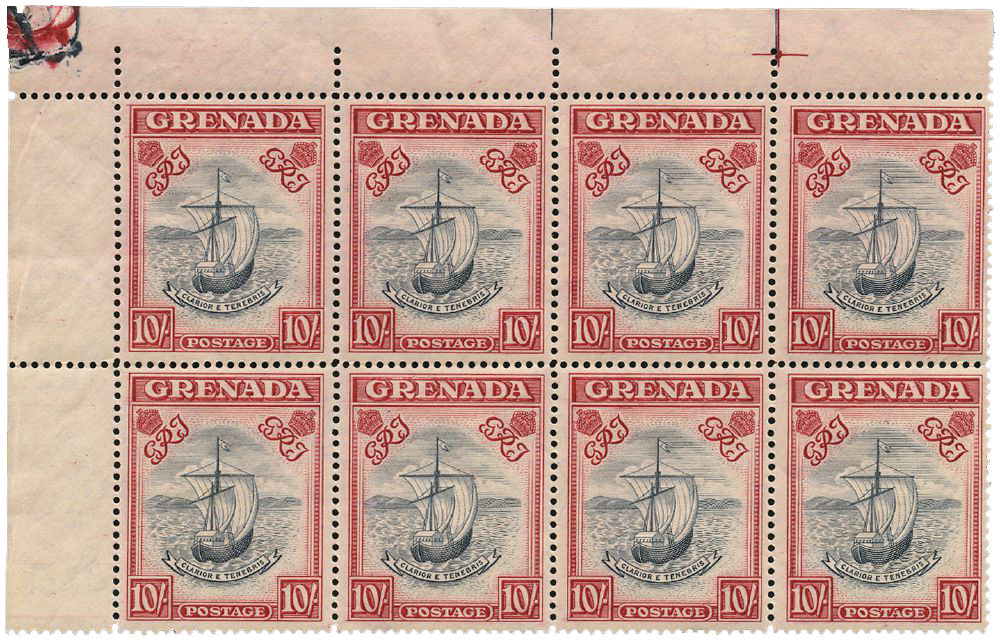 A personal favourite and an item no nautical collection would be complete without is the famous Canadian Bluenose stamp. Bluenose was the schooner built in 1921 in Nova Scotia, a celebrated racing and fishing vessel.  Nicknamed the ‘Queen of the North Atlantic’, it became something of an icon of province of Nova Scotia and an important Canadian symbol.

Bluenose served as a working vessel and a racing champion until she was wrecked in 1946. It was depicted under full sail on the 50c stamp issued by the Canadian government in January 1929. The awarded ship is so famous in Canada that it was introduced in the Canada Sports Hall of Fame along with its legendary captain Angus Walters. It also appears on Nova Scotia license plates and on the Canadian dime coin.

CANADA 1928 SG275/85 Mint, a set with Bluenose depicted in the second row, as second from the right
View stamp

Inhabited by Kalinago people since the 13th century, and before that by other Native Americans, Barbados was visited by Spanish navigators in the late 15th century. Barbados first appeared on Spanish maps in 1511 and the British attempted the first permanent settlement on the island in the 17th century.

In 1625, the passing trade ship named Olive Blossom owned by an English merchant William Courten and led by Captain John Powell landed at St. James Town. The visitors erected a cross with the inscription ‘for James K. of E. and this island’, departing for England and claiming the island for the English Crown. Courten financed the colonisation of Barbados but lost his investment and interest in the islands to the Earl of Carlisle.

The Olive Blossom was immortalized on these beautiful stamps featuring particularly striking colouring in green and blue.  This stamp is an early commemorative, celebrating the tercentenary of the annexation of Barbados. It was designed by Gertrude Carter. 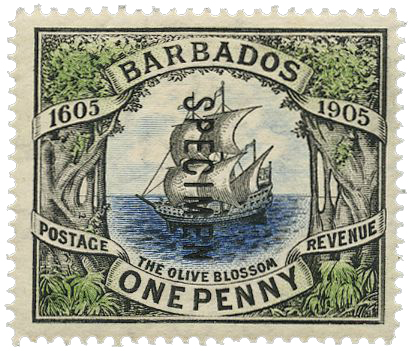 My next choice is not one particular ship, but a rather striking type of sailing vessel. Known as the lakatoi, these are the double-hulled vessels of Papua New Guinea. Prevalent in the 19th century for trade purposes, lakatoi are an inextricable part of Papuan heritage and trade.

The legend says that a certain Edai Siabo was returning from a fishing trip when a great eel (spirit of the sea) appeared and dragged him under the water. It instructed him to build a great lakatoi and sail west with goods.

He built it and called it Bogebada (the Sea Eagle). This was the start of traditional trade voyages, the Hiri, becoming an important part of the culture of the Motu people of Papua New Guinea. First appearing on British colonial stamps in 1901, lakatoi were engraved from a photograph taken by Captain Barton. The Hiri voyages ceased in the 1950s, yet nowadays you can still see the lakatoi in action at the Hiri Moale Festival, also an independence celebration for Papua New Guinea. 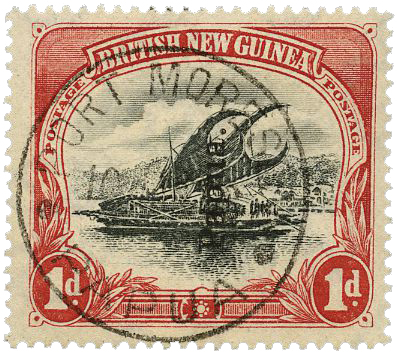 The stamp marks the occasion of the arrival of the first English settlers in 1623, led by Thomas Warner on the ship Hopewell. Warner scouted the friendly indigenous population, fertile soil, freshwater sources and salt deposits of the island.

He made peace with the Kalinago inhabitants, whose leader was Ouboutou Tegremante. Upon gathering more funds and manpower, Warner returned with Hopewell to St. Kitts in 1624 and established the colony of Saint Christopher, the first English colony in the Caribbean. 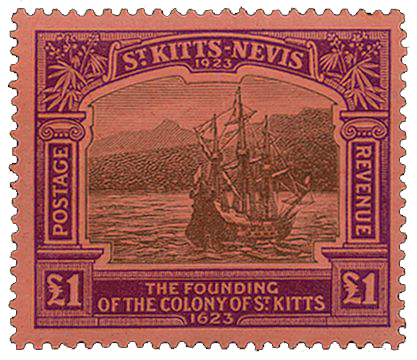