The British Post Office commenced the issue of postage stamps in May 1840 but it was not until 15 years later that the railway companies adopted the same idea in connection with the conveyance of newspapers. This was necessary as, between 1712 to June 1855, newspapers were subject to a tax of between a farthing and 4d but in conjunction with this tax, all newspapers could be posted free of charge. The tax was officially abolished from July 1st 1855 and the minimum rate for the conveyance of newspapers was fixed at 1d but later reduced to ½d in October 1870. In conjunction with this, the 1⁄2d Rose-red "Bantham" was issued and it was intended for use of such mailings. 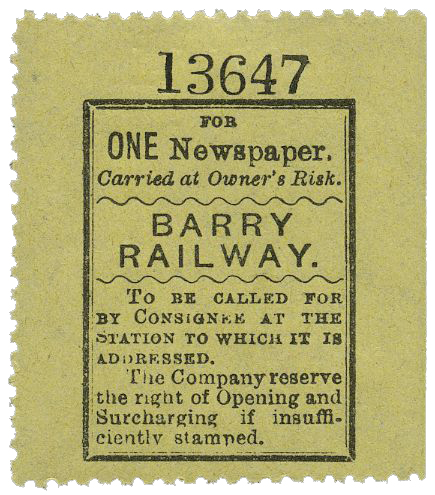 Whilst almost all of the Railway Letter stamps are in the same design, there is very little uniformity amongst the Railway Newspaper and Parcel Labels, most of the original newspaper and parcel designs were rather large in size but with time the railway companies reduced the dimensions, most likely to be more cost-efficient and produce more labels per sheet.

Designs were infrequently changed, even when dimensions were reduced, more often than not the design was kept the same and also reduced in size.

As well as the designs being very basic they were produced by a number of different printing companies and very few security features were included in the production with none having corner letters, watermarks fugitive inks etc. unlike the general postage stamps of the time. As cost-efficiency was the primary concern for the companies producing these labels, many were not perforated and cut directly from the sheet when required. 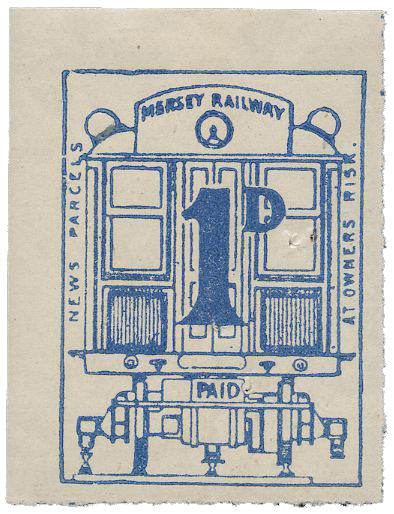 The labels were originally issued for the pre-payment of newspapers only and many would not have denominations and would be inscribed "For one newspaper only", "For two newspapers" and so on, this continued for some offices until the 1870s, In 1877 The Midland Great Western Railway of Ireland Company produced a label to also include parcels and by the late 1890's all companies had more or less adopted the new system of incorporating the conveyance of parcels on the railways as well as newspapers. this resulted in each Railway company effectively becoming a private courier on their own lines. 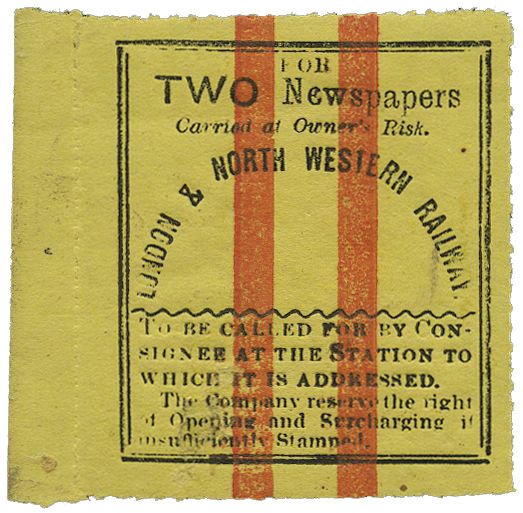 At first, some of the Railway companies were inclined to express the values in weight but owing to the weights varying according to distance this method was found rather cumbersome and it was only retained into the 20th century by the North Eastern Railway Company for local parcels. Farthing stamps were limited to the Scottish railways with the lowest value issued by English or Welsh companies being 1⁄2d which as mentioned before was the minimum rate for sending a single newspaper. The stamps used in England and Wales for newspaper parcels are usually of the values of 1/2d,1d, 2d, 3d, 4d and 6d there was little call for any higher values.

There were some other values such as "corn samples" these were often without denominations but would be prepaid at 3d, these labels allowed farmers to send corn and similar produce up or down the line as long as each parcel was kept below 1lb in weight, with some of the more rural companies issuing sets for farm and agriculture produce, including milk and eggs. 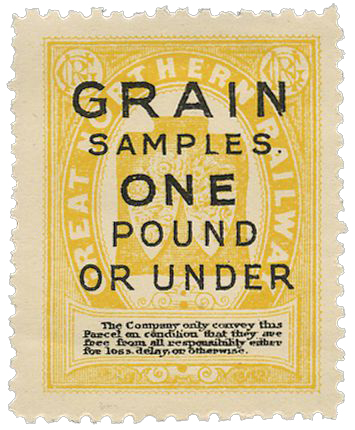 To help with stocktaking and to avoid misuse most railway companies had introduced an overprinted numbering system by the late 19th century but that is where the uniformity ends as some started their numbering systems at "0" and others at "1", as for formating, some ran a numbering system from top to bottom, right to left, as it was assumed most users of sheets would be right-handed and thus allowing for the first stamp to be removed from the sheet (top right) also being the lowest number in the sequence. Although this approach makes sense from a practical standpoint a similar amount of companies issued stamps with a more traditional numbering system of left to right, top to bottom.

When larger companies numbered stamps they would generally number in batches of 100,000 or 1,000,000 depending on the need and then would issue serial numbers for each subsequent batch of numbers that were required.

It is not known how many labels each individual Railway company issued due to there being no records being available as they were not as strict as the general post office when it came to record-keeping but many of the smaller companies would issue one set and the need to print more sheets or subsequent values never arose. This would suggest that although the need for these labels at provincial stations and smaller companies was warranted, the speed of use was relatively slow and the additional printings would have been irresponsible. However, some of the larger companies issued labels in vast quantities, for example, the London and North Western Railway Company issued over 12,000,000 1d newspaper stamps between 1860 to 1897 and between 1899 to 1905 over 10,000,000 6d parcel labels were issued. 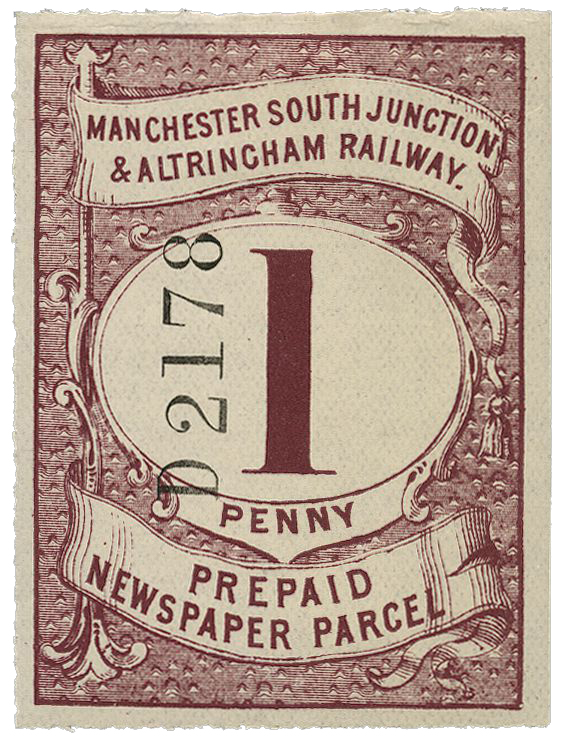 This article was written by GB Specialist Scott Bradley.