On 6 February 1952 Princess Elizabeth became Queen Elizabeth II: during 2022 she has celebrated her Platinum Jubilee, the first British monarch to reach this milestone. Following her accession, one of the first tasks was to select portraits that would be used for coinage and for the Queen’s stamps. 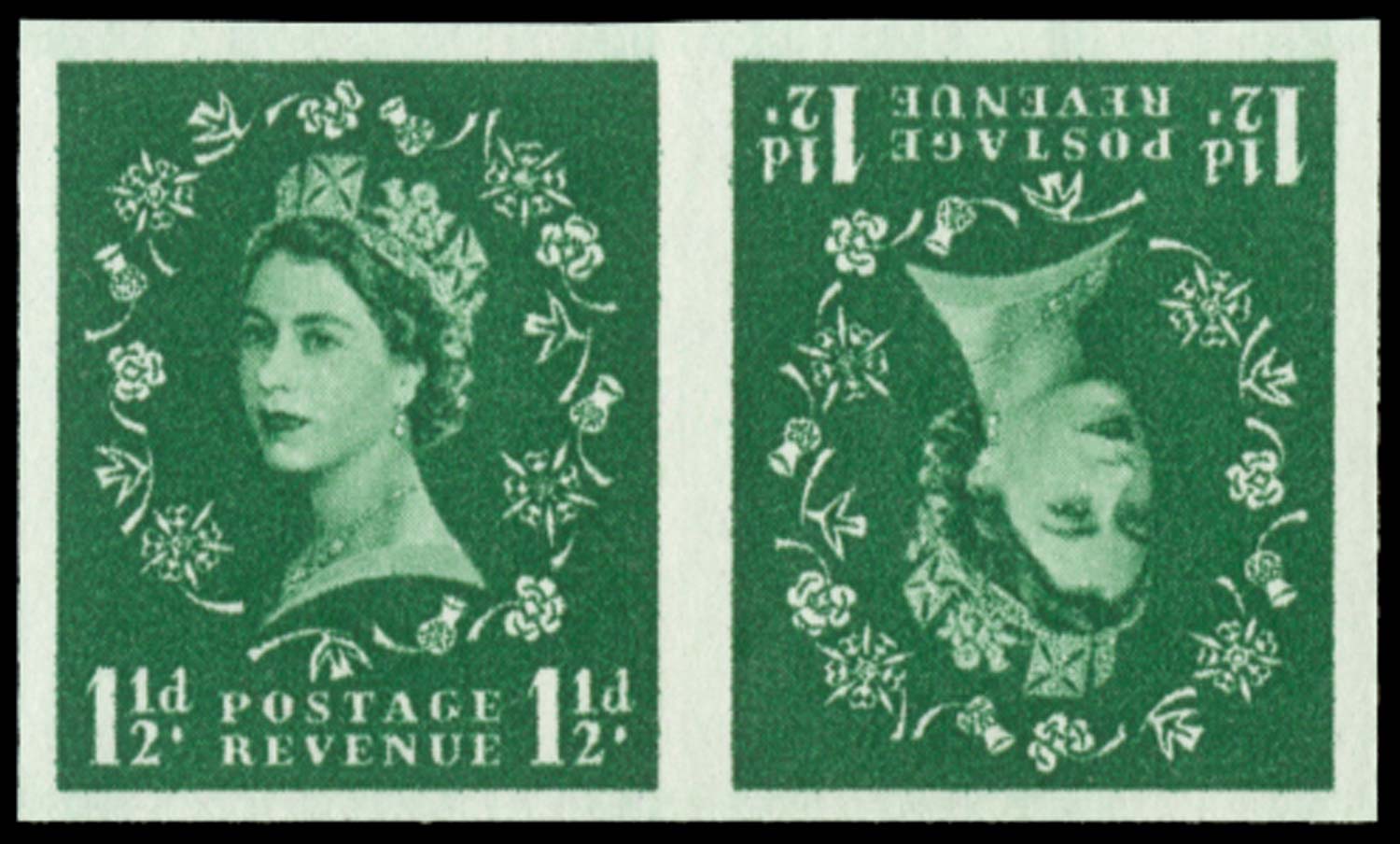 Sittings at the studios of Dorothy Wilding resulted in a three-quarter portrait that first appeared on stamps – 1½d and 2½d – issued on 5 December 1952. Over the months the range of values expanded from ½d to 1s 6d. The so-called Wilding definitives stamps were issued in normal sheets, plus booklets and rolls. Throughout the life of the designs, they were printed on paper with one of three different watermarks: depending on the source of the stamps the watermark will be upright, inverted or sideways. Errors that can be found on the ‘Wildings’ include imperforates where the stamps are missing the perforations. Also ‘tête-bêche’, where one stamp is inverted in relation to its neighbour: such errors come from sheets intended for the production of stamp booklets, such sheets having half the stamps upright, half upside down. The stamp's condition is superb and it is classified as scarce. The stamp design is based on the Wildling portrait of the Queen. 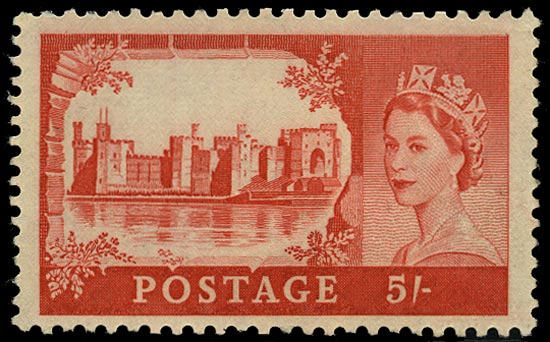 Come the 1960s thoughts turned to a new portrait to be used on British stamps. The result was the sculpture of the Queen by Arnold Machin, which was carefully photographed, the photograph captured in a simple setting with nothing other than the denomination. During the reign of Queen Elizabeth II, the high values first appeared in 1955, the Dorothy Wilding portrait appearing alongside famous British castles: Carrickfergus Castle (2s 6d), Caernarvon Castle (5s), Edinburgh Castle (10s) and Windsor Castle (£1). During their life, these stamps were printed first by Waterlow & Sons, then by De La Rue, and finally by Bradbury, Wilkinson. The same four castles would subsequently appear again on high values from 1988, still printed using recess, at first by Harrison & Sons and later by Joh Enschedé of The Netherlands. 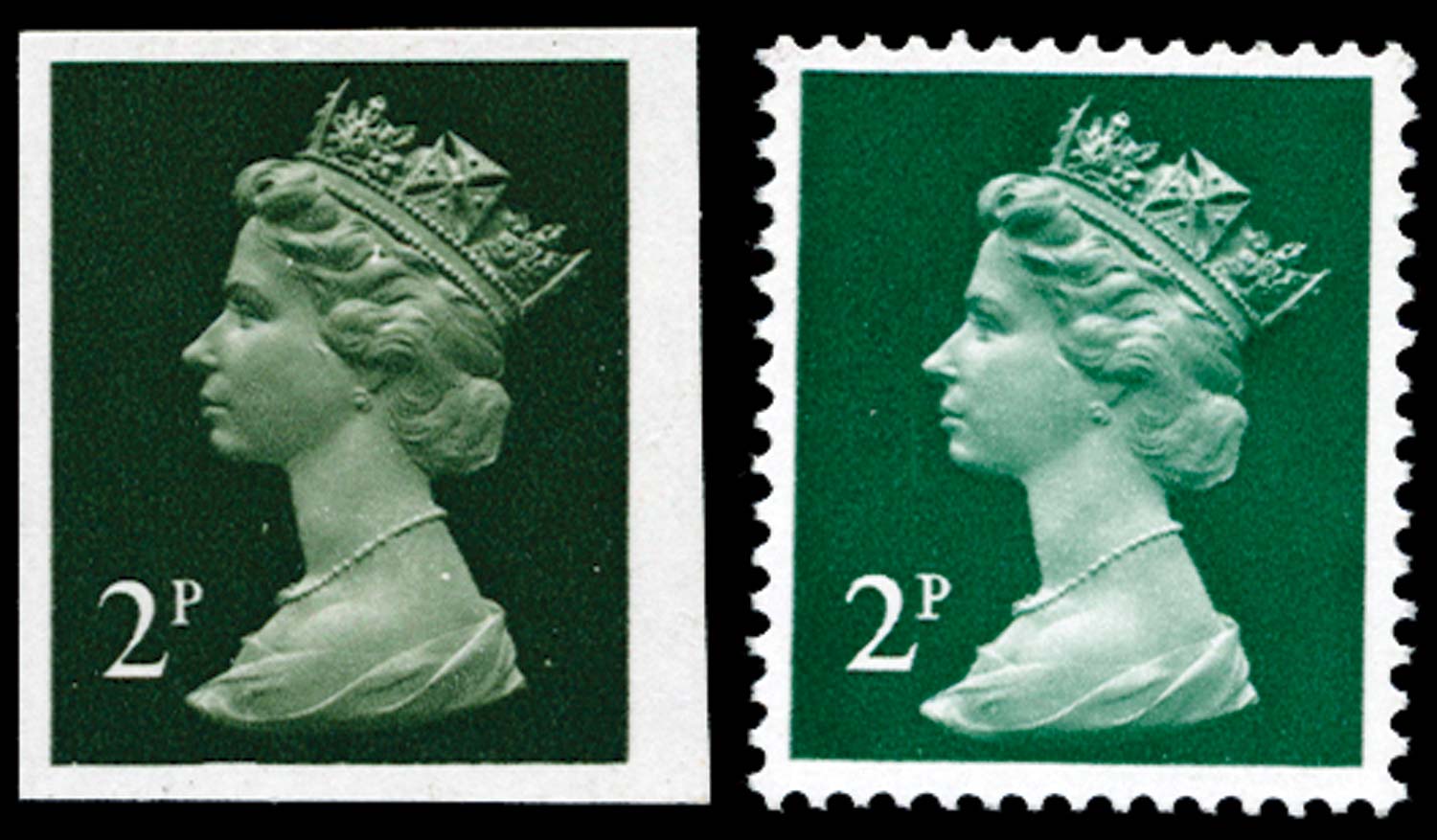 Harrison & Sons who had printed British stamps since the reign of King George V faced competition; the photogravure printing process was improving, in some cases making way for the cheaper lithography. Many of the changes resulted in trials, essays and proofs that often find their way onto the philatelic market and can add a focal point to a collection. For many years the so-called ‘high values’ were of distinctive design and printed using the more expensive recess or line-engraved process. During the reign of Queen Elizabeth II, the high values first appeared in 1955 the stamps are designed in deep myrtle green with one stamp being perforated and the other one being from a square sheet.

Her Majesty The Queen Platinum Jubilee 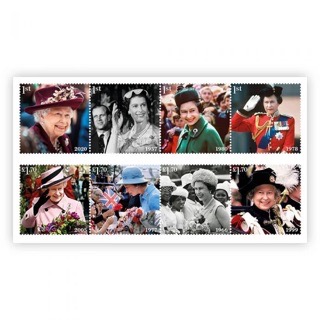 For a reign that has spanned 70 years, it is not surprising that the life of Queen Elizabeth II has been fully recorded by stamps. The first landmark was the Silver Jubilee in 1977, the stamps being reminiscent of those issued in 1934.  The 40th anniversary of the Accession was marked in 1992 by five stamps, each featuring a different photograph of the Queen. This has been a design formula used many times providing a photographic history of the reign through stamps. For the Golden Jubilee in 2002, five photographic studies of the Queen were chosen: Dorothy Wilding, Cecil Beaton, Lord Snowdon, Yousef Karsh and Tim Graham. These stamps were printed on paper specially prepared for the occasion with a watermark revealing ‘50’. In 2012, for the Diamond Jubilee, images from the reign were selected including the Queen’s first Christmas television broadcast in 1957, and the Queen addressing the United Nations General Assembly earlier the same year. For the Platinum Jubilee this year, the set of eight stamps issued by Royal Mail on 4 February once more focuses on images taken during her reign.