As I occasionally have to do, I declare a special interest in Sarawak.

My father worked there between 1964-70, and I travelled out once or twice a year to visit from my boarding schools in Ireland or England. In those days such a journey would have been by VC-10, and necessitated an overnight stay in the famous Raffles Hotel in Singapore, looked after by the famous BOAC 'Aunties'. During the years in question, the 'Confrontation' with communist insurgents was underway and there were various restrictions in force.

However, my parents felt it safe enough for me to wander around the city of Kuching without accompaniment. There is a tremendous racial mix in Sarawak but the only tiny signs of negative racial feelings I encountered were at the Sarawak Club, which was exclusively for the white and/or rich. 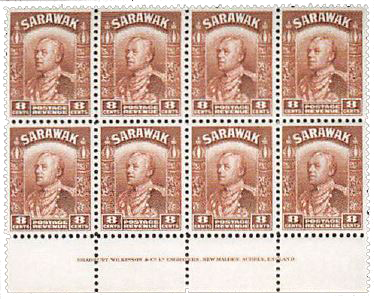 My father collected stamps for sale for charity from local banks and offices, and I suspect that it was while there that my love of postmarks was originally kindled. I remember that I suggested to him that we should keep some complete sets of the postmarks current at the time - he did this and I still have some of these sets. The low values of all the Malaysian States were valid for use in Sarawak at the time, and I recall us trying to balance sets of the other states by using them from Kuching. So if you find odd values from the Malay States used in this way, they might have originated from us!

Life there seems, in retrospect, more unusual than it did at the time. One of the houses we lived in was 'across the river' from the main city, on the same side as the Astana (the Governor's residence). My mother didn't like idleness and decided to write a history of Kuching. We did quite a bit of leg-work together, and I recall finding the pets' graveyard of the old Rajahs and photographing headstones with her. Her book was published by the Borneo Literature Bureau and I gather that it has not been superseded since. Our house was surrounded on three sides by jungle; we had two cats, whose food and milk saucers were outside the back door, to its right.

These saucers were constantly being raided by, we assumed, a dog from a local kampong (village). One morning I came down for breakfast and was motioned to silence by my mother; the saucers were rattling. She quietly took hold of a besom and leapt out to scare the dog away. I had never realised before that people were capable of going into reverse quite so quickly - perhaps I have looked at cartoons in a different light since then - for she landed and then instantly performed the same manoeuvre again, this time backwards, to land inside the kitchen again.  She had surprised not a dog, but a monitor lizard of some size. For her, it was like leaping from the kitchen door expecting no danger, to be confronted by, to all intents and purposes, a dragon of some 4 feet in length. For some reason, she felt my hilarity to be misplaced.

Enough of fond memories, and back to stamps! The Sarawak 1934 set, depicting Sir Charles Vyner Brooke (as did all the stamps of the reign until 1948 and the Silver Wedding issue), was still current at the beginning of King George VI's reign, and new colours for five values came out in 1941. These are scarcer than the other low values and are often not easy to find on their own. The whole set is still not unduly expensive, but potential purchasers should look out for foxing and avoid stamps so affected. The 5ct is known imperforate between stamp and left margin, and imperforate plate proofs may be found for all values. We will deal with the Japanese Occupation issues at a later date.

After the Occupation ended, Australian Forces were the first in and they set up postal services. Initially, mail was carried free and then Australian stamps were used. Straits Times cancels were later used at several offices. The Civil Affairs Officer at Baram, also known as Marudi, produced provisional stamps which are extremely scarce. The B.M.A. set came out in 1945 and boasts one great rarity - the 2ct with overprint double.

The Royal Cypher overprints are relatively common, victims of the speculative buying after the end of the war. Again, there is a great rarity in the set - the 3ct with albino overprint. This can be distinguished (apart from the uninked impression of the overprint on the reverse) from the unoverprinted 3ct green of the 1941 changes of colour by the fact that the latter is unwatermarked, while the Royal Cypher set is on watermarked paper. Check your example from the 1941 set!

The 1950 set was a fine set of the 'tourist label' type. Indeed, it was aimed at a rather wider audience than just potential tourists! The 50ct, showing a bare-breasted native woman, was specifically designed to attract young civil servants to decide to make their careers in Sarawak. I wonder if any did venture east as a result of seeing this stamp.  There had been a pictorial set mooted for the Centenary of the Brooke family as Rajahs in 1941, and there is a tale of how a rather poorly- designed issue was printed and despatched to Sarawak, only for the ship carrying them to be sunk en route. It seems odd, however, that there are no examples in the Royal Collection or anywhere else, just a set of photographic essays.

There is not much unusual to look for here, just imprint and plate blocks, although the 10ct (whose anteater was improperly represented) was replaced in 1952 by a map design. It is possible to try to collect the printings of this set, although the differences are usually slight; the 1Oct Map can be found on cream and white papers and there is a good shade of the 1ct, the original printing being in greenish-black, and the 1952 printing in black. (The difference between these two printings can be seen clearly in daylight and on the computer screen).

With the Japanese Occupation in progress, the 1941 Centenary set was not issued until 1946. Used has always been more difficult than mint, and I remember a young friend of mine buying a used set from one of the street-side stalls. I looked at it and immediately pronounced the cancellations forged, which I have no doubt they were. So dubious cancels on the $1 have been around for at least 50 years! Both the Silver Wedding and UPU sets are quite hard to find in nicely used condition.

There is an excellent society for Sarawak, which also takes in North Borneo and Brunei. I have been a member for a long time now and always enjoy their bulletins.