Every year millions of Christmas cards and messages travel the world wishing friends and family the compliments of the season. It’s a tradition that has been going on for over 150 years and one that, we’re sure will continue for many years to come, even with the recent trend of e-Christmas messages.

In this archived issue of Gibbons Stamp Monthly, John Scott reveals a fascinating spectrum of design, novelty and innovation that has punctuated the evolution of the Christmas card over the course of its history.

From the first simple designs, to those featuring elaborate embossed cut-work, Christmas cards are the ideal choice for collectors looking to obtain a fascinating and festive slice of postal and social history. You don’t get that with a tacky dancing Santa in your email inbox.

Christmas is one of those celebrations which seem to have been with us for generations with its enduring themes of Father Christmas, reindeer, robins, mistletoe, holly, carols and Christmas cards. But in historical terms, both the jolly gentleman in the red coat and the cards that we post to long-lost friends and relatives are relative newcomers to the stage.

True, the first Christmas card was created as early as 1843 by Henry Cole as a means of easing the burden of writing to his many friends and acquaintances—by a strange coincidence, he was also Secretary to the Mercantile Committee on Postage, which helped to develop the concept of affordable postage.

However, with only around 20 of such cards known to have survived, the cost of acquiring such an example is well beyond the means of many collectors today and, as readers will know, I am constantly on the look-out for objects which do not break the bank, especially at this time of year, and yet will create an interesting sideline to the main collection and offer a seasonal amusement to fellow members of your local stamp club.

A luxury item for the lucky few

The themes of this first card, designed by John Horsley, were the family Christmas meal and the giving of charity to the less fortunate. At a cost of one shilling each, compared to the weekly working man’s wage of under twenty shillings, the cards were very much a luxury item for Henry and friends.

But by this time, not only did we have cheap postage but also the development of a market in decorated writing paper. Consequently, it was the latter format which expanded into the seasonal celebration before the concept of the illustrated Christmas card really took off.

Christmas writing paper began life in the 1850s. It very much followed the style of the contemporary topographical and comic paper, in being printed in black from an engraved plate. 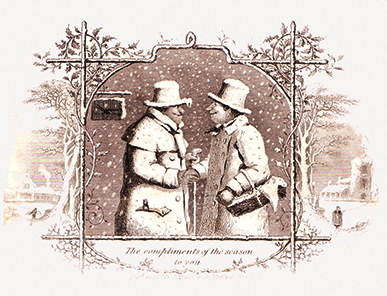 ‘The compliments of the season’ published by Newman of London as a sheet of writing paper c.1850.

It was not until later that colour printed stationery and Father Christmas himself make their first appearance. 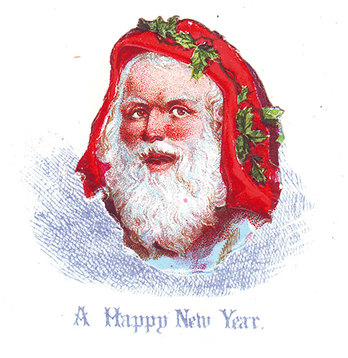 A chromo-litho scrap of Father Christmas has been added to the blue background and inscription to create this writing paper c.1880.

More popular was the paper which had a relatively modest Christmas motif, printed in colour and often embossed at its head. A similar motif could be repeated on the rear flap of the envelope. 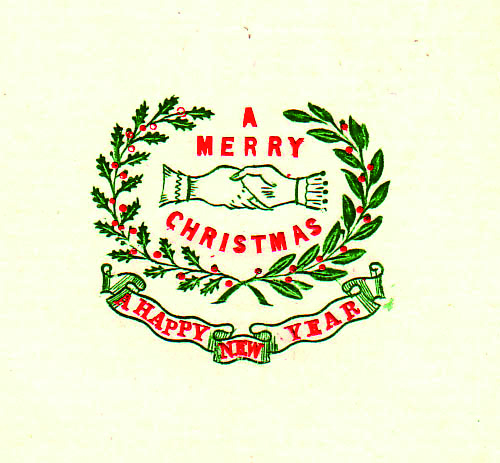 A die-stamped vignette heads up this sheet of writing paper sent by Maggie & Lydia Green to Mrs Hesketh c.1860

By the mid-1860s such stationery was in widespread use among the middle classes, with packs of paper and envelopes being sold in highly decorated wrappers. 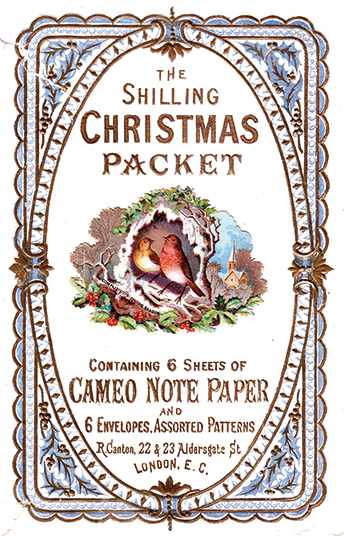 The wrapper from a packet of Christmas stationery published by R Canton of London c.1880.

But this did not remove the burden of having to fill the blank paper with well-chosen words at such a busy time of year. In an earlier article, I demonstrated how topographical writing paper grew out of the practice of using visiting cards embellished with architectural motifs, now the trend was reversed, with the production of small cards on the visiting card scale with equally proportioned envelopes but now bearing images appropriate to the season. 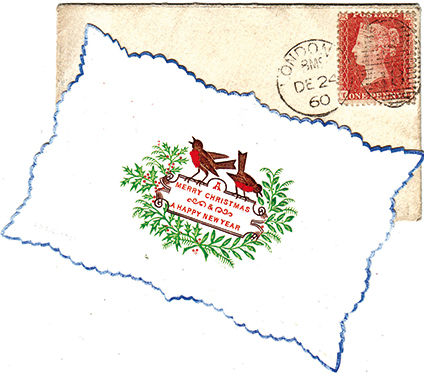 A die-stamped visiting card format posted from London to Northampton on Christmas Eve 1860.

Messages for the masses

From such modest beginnings, it was perhaps inevitable that the Christmas card should grow in size and concept to something that we would recognise today. This was made possible, at least in part, by the development of mechanized lithographic printing in the 1860s, which made it possible to produce huge quantities for a relatively modest price.

The growing urban populations meant also that people needed to communicate with others beyond the traditional boundaries of the country village from which they might have originated.

This method of printing was much quicker than techniques, such as die-stamping, where the raised part of the image is printed in colour, a product which was advertised first by the well-known firm of Charles Goodall & Son in 1859. 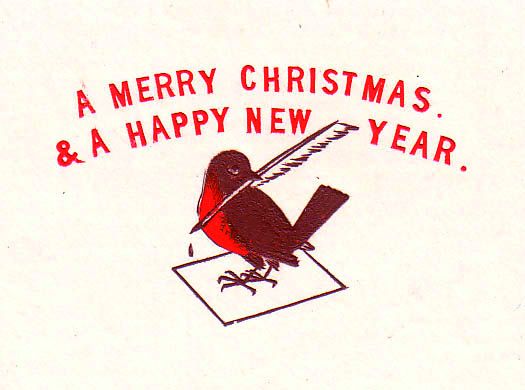 A die-stamped image of a robin holding a quill pen—is he writing a ‘round robin’ to all his friends?

Other methods involved blind embossing, in other words without colour on the raised portion, and cameo work, where the embossing has a coloured background.

However, it was chromolithography that became all the rage by the 1880s, albeit not necessarily with an image that we would associate readily with such a happy time of year. While robins, holly, geese, flowers and Christmas puddings feature prominently, so do such oddities such as monkeys and reptiles. Even some of the more macabre aspects of Victorian humour made their way into circulation, although themes of stabbings and blood-letting are more of an acquired taste.

Many of these cards were printed in Germany and the era is remarkable for the number of German publishers who set up branches in London—a market which evaporated completely with the advent of the First World War. Some of these cards were incredibly elaborate with moving parts in addition and need to be treated with great respect when they can be found intact today. 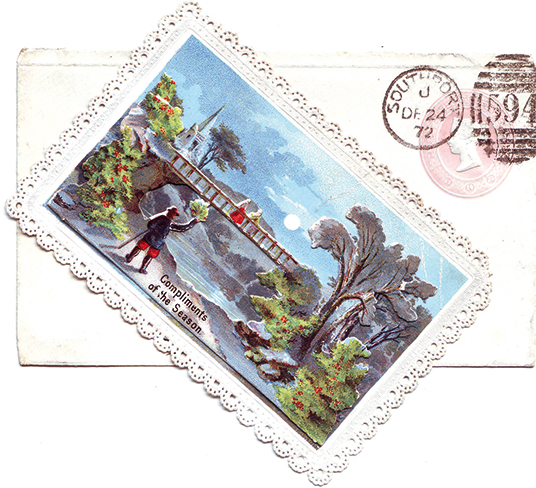 A 3-D Chromo-litho card, where the bridge and figures move forward from the background, sent in a Penny Pink envelope to Mrs Hesketh on Christmas Eve 1872.

The British Empire also made a major contribution to the rapid spread of Christmas cards around the world. Families had been broken up by emigration or by service overseas and this was the one time of year when the need to stay in touch was as strong then as it is now.

But oddly, while the illustrated Christmas card reduced the need to write, the desire for the privacy of an envelope remained. At first glance, the postcard would seem the obvious method, not only of reducing the cost still further, but also of limiting the space for writing even more, but the concept never seemed to catch on.

The first illustrated Christmas postcard was published in 1870 to take advantage of the lower rates of postage, but the folded card remained far more popular—with so many postcards being sent during excursions to the seaside in Edwardian England, perhaps the medium did not seem special enough for such a special time of year.

Ordinary postcard views can be found with an elementary Christmas greeting added in a rather primitive fashion, while other publishers produced what was described as ‘Sensitised’ self-toning cards and more elaborate designs featuring embossed cut-work. 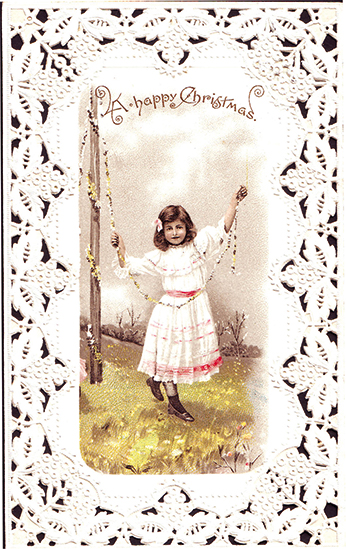 A Christmas postcard with a delicate pierced border printed in Germany and posted from Weybridge on Christmas Eve 1911.

Novelty cards can be found also for the Christmas market, such as the comparatively common leather cards and the considerably rarer shaped cards, where seasonal messages emerge from inside a mince pie. The need for economy in wartime also contributed to another shortlived rarity, the Christmas lettercard, but perhaps the difficulty in standing such an object on the mantelpiece meant that this format seems to have died out with more prosperous times. 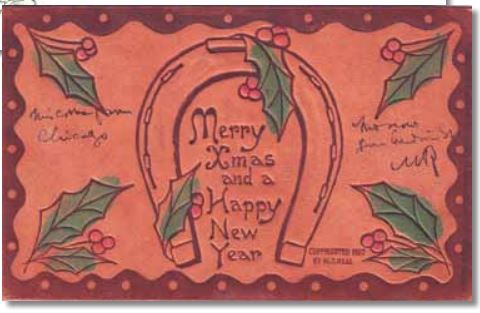 A Christmas postcard with a delicate pierced border printed in Germany and posted from Weybridge on Christmas Eve 1911.

The other way of collecting Christmas cards is to look not so much at the format and the design but at the person who sent them, or to whom they were sent. The Royal Family’s productions are amongst the best known today but Princess Victoria, the future King Edward VII’s daughter, was assiduous in sending her greetings to her staff, if sometimes leaving it rather late in the day, even by Victorian standards. 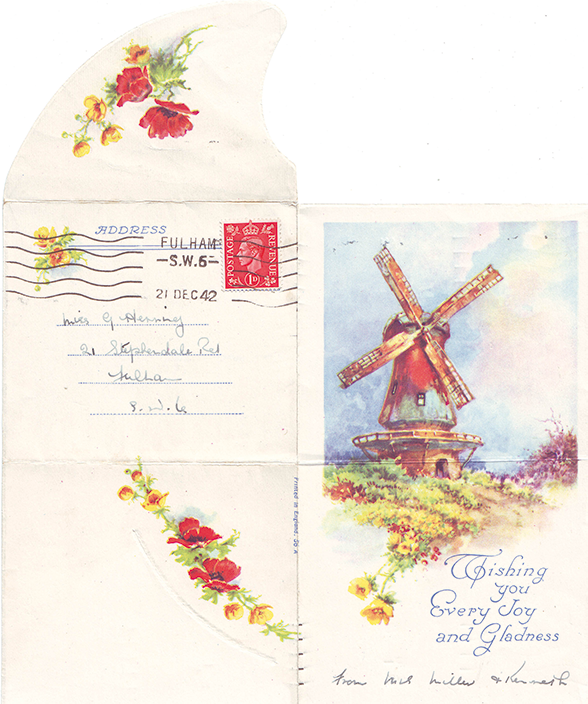 A Christmas Lettercard posted from Fulham in 1942.

In the 1880s she was making use of fairly standard commercial designs, the origin being betrayed externally only by the die-stamped address of the location from which they were mailed.

Both postal administrations and stamp dealers produced Christmas cards for their colleagues and customers and even used up unsaleable stock, such as the example of Newfoundland’s first postal stationery card of 1873, which was adapted by H Cooke, Stamp Dealers in Stoke Newington, for sending the compliments of the season in 1907, to which was added a postscript ‘Gibbons Catalogue 1908 just out’. But whatever your taste in Christmas cards don’t forget the contemporary publisher’s exhortation to ‘Make Someone Happy, Send Christmas and New Year Cards’.