The history of the Mulready cover

Mulready covers were the first prepaid postal stationery issued in 1840, parallel with the world's first stamp, the Penny Black. Soon after their issue, they became infamous within the general public and artistic community alike as their design was perceived to be overly idealised and pretentious.

Mulready’s design was a romanticised view of the benefits of affordable mail, officially titled
Britannia sending letters to the world. The design featured a personification of Britannia, the national personification of the United Kingdom, as the focal point. The figures at upper left and right allude to the continents of Asia and North America. In the lower corners, families are absorbed in their letters. 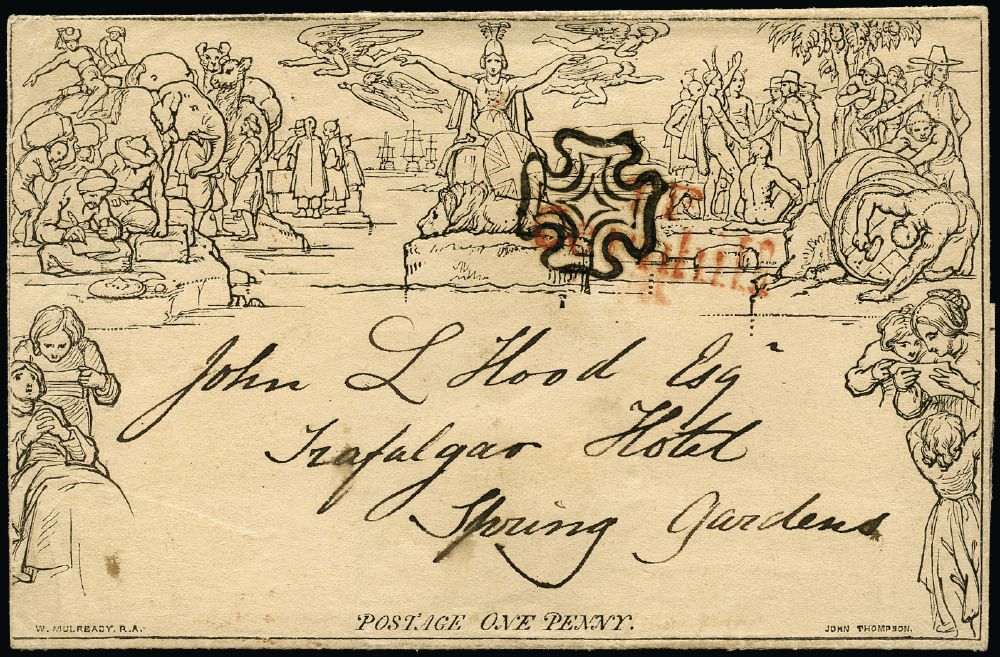 Within only a week of issue, the legendary postal reformer Rowland Hill stated:

‘I fear we will be obligated to substitute some other stamp for that designed by Mulready, which is abused and ridiculed on all sides, the public have shown their disregard and even distaste for beauty.’

The design was publicly lampooned and prompted numerous contemporary caricatures. However, it is important to examine these covers in the context of Mulready’s style as a painter as it is his education and inspiration that led to the vivid idealism of the first prepaid covers. 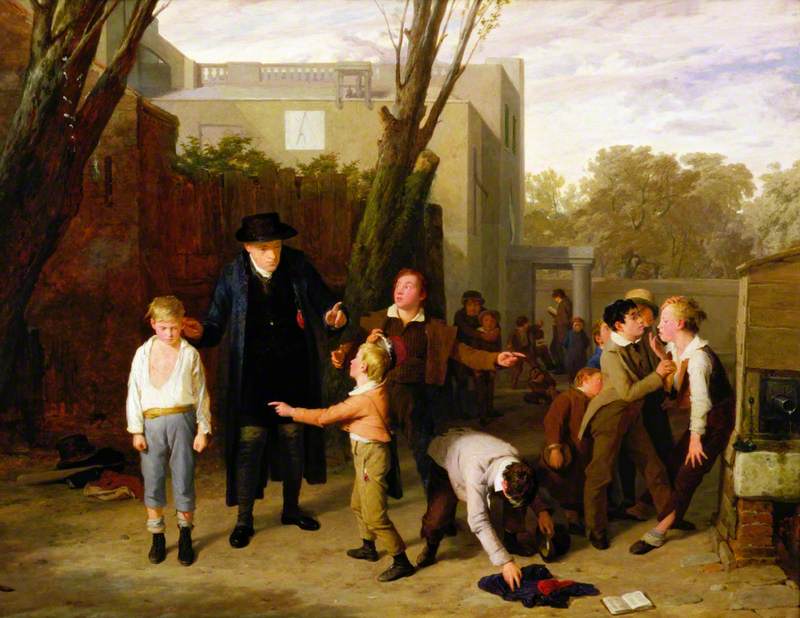 Who was William Mulready?

William Mulready was an Irish painter born in 1786. His family moved to London during his
childhood and at the young age of 14 he was accepted at the Royal Academy School in London. In his
early years at the Royal Academy, Mulready painted landscapes, eventually evolving his style
towards contemporary genre paintings.

In the first decades of 1800s, he became popular for his romantic scenes of country life. His popularity rose in 1816 when he painted The Fight Interrupted, a playful scene where a vicar is chastising two young boys who have been fighting, executed in soft pastel palette. It is a gentle scene with an air of mischief that set his reputation.

We can observe a similar style and romantic themes developing further in his later works of 1830s and 1840s.

Family depictions on Mulready covers can be observed in his paintings such as ‘Brother and Sister’ from 1836 and ‘First Love’ from 1839. They feature families in nature and rural surroundings, engrossed in gentle interactions, gazing at their beloved (like in ‘The Sonnet’ from 1839). 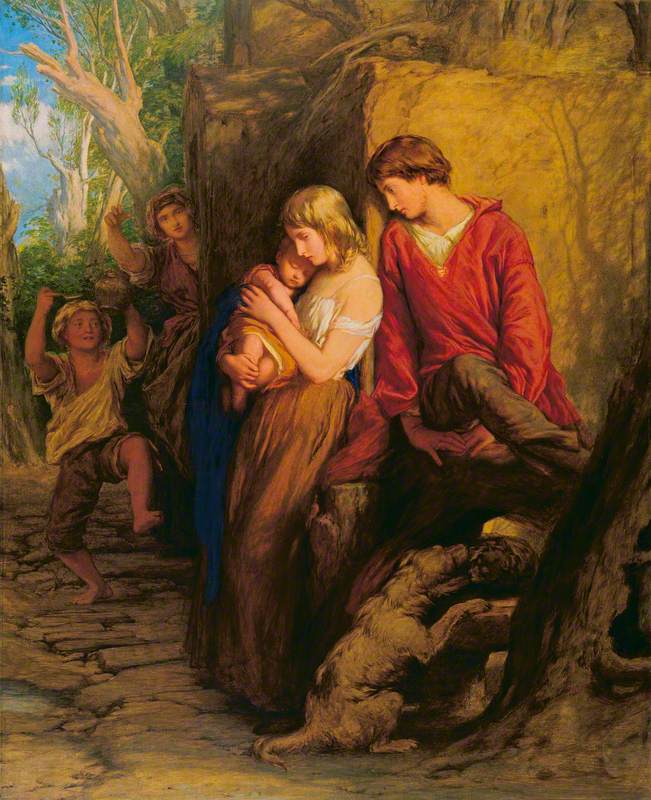 This sentimentality and intimacy are a hallmark of his painterly style; however, they have been dismissed on the prepaid covers by the general audiences.

Mulready's depiction of Britannia itself is most unusual, as in art and numismatics she is often depicted in three-quarter profile. Mulready’s Britannia is front-facing with her hands spread wide as she dispatches her messengers around the world. The frontal Britannia is not the most canonical E.S.
depiction, and she is more often seen on architecture, than in painting. In addition, the lion that
accompanies Britannia is normally depicted behind her rather than in front. Hence, this is a more
atypical choice for a classical personification.

The scenes alluding to continents of Asia and North America in the top corners of the cover
demonstrate a linear perspective, yet appear crowded, almost incoherent in their layering of
characters.

For Mulready, these genre compositions in linear perspective worked well on a larger
medium (the canvas), as observed in the ‘The Seven Ages of Man’ (1836-1839), which is more than
one meter wide. Yet, they do not come across as coherent on the limited space of the postal cover. 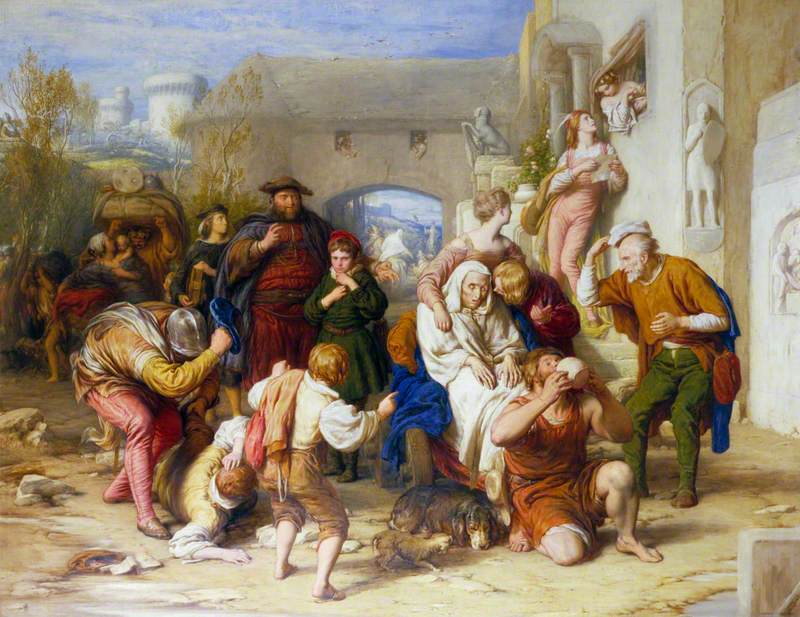 Despite being misunderstood in their romanticism, Mulreadys covers remain one of the most
interesting witnesses to the conception of affordable mail. Because of their short-lived issue, they
remain highly collectable and very interesting to collectors who seek valuable Sunday issues
(pictured below) and often pair them with caricatures. Mulready’s artistic vision has witnessed a
reinvigorated appreciation lasting until the present day. 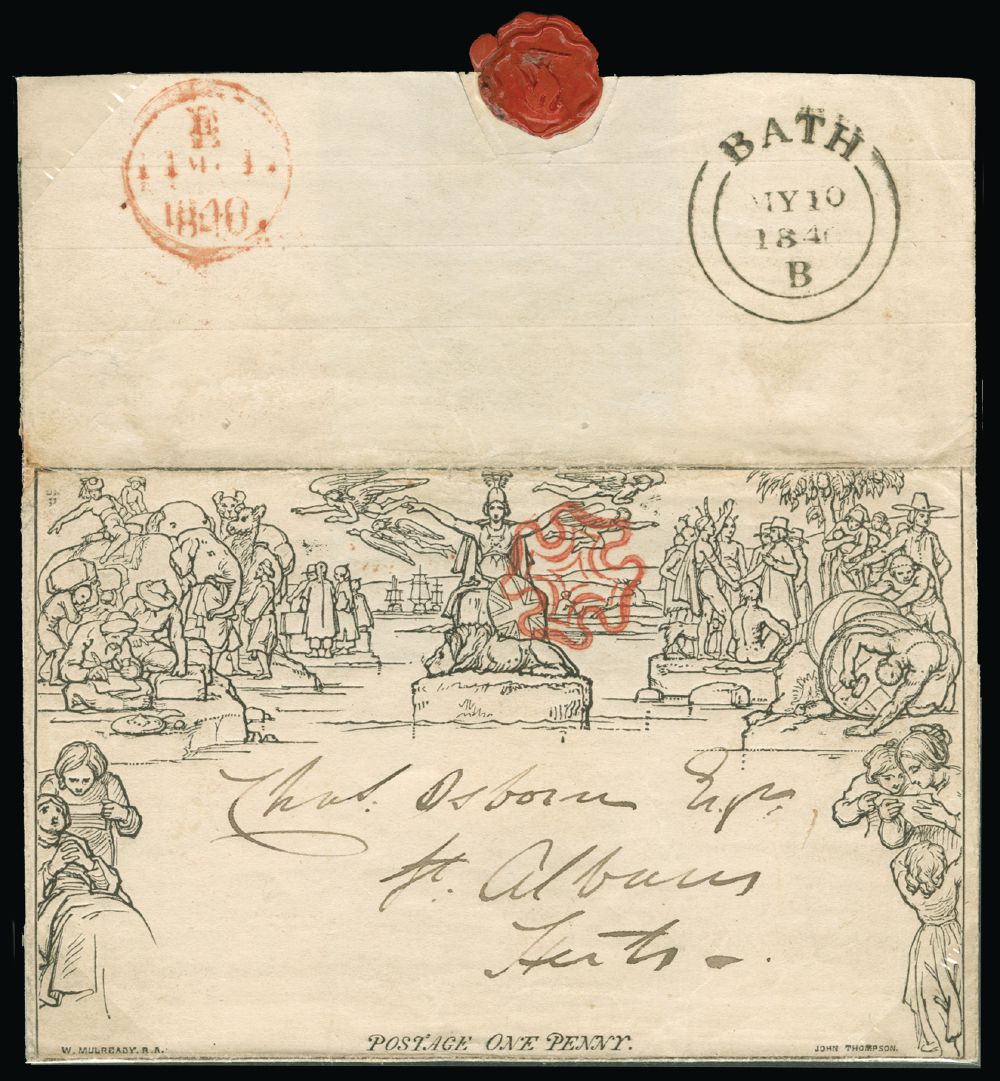 1840 1d Mulready Lettersheet (Forme 2, Stereo A27). Very fine used example sent from Bath to St. Albans neatly cancelled by a superb red MC, backstamped with a Bath cds for the first Sunday MY.10.1840 and a London transit cds for the following day. Minor peripheral faults otherwise a magnificent first Sunday usage, far finer than normally seen for this the rarest of the "May-dates". Ex. "Mayflower" 2007 BPA Cert. View the item

The most important works of William Mulready are housed at the Victoria & Albert Museum and
Tate Britain. A selection of high quality Mulready envelopes is available in our premises at 399
Strand.