This article was published in August 1970's issue of Gibbons Stamp Monthly.

The annual 'Europa' stamps are usually issued in a uniform design featuring a specific motif in support of the cause of a united Europe or, as the French-speaking countries picturesquely express it—'L'ldee Europeenne'. Strangely enough, these so-called 'Europa' stamps started some years before the creation of the CEPT—the Conference Europeenne des Postes et des Telecommunications—which has since been so closely linked with them.

These stamps have always been popular with collectors and some of the early issues have substantially increased in value. Le Brocquy's 'flaming sun', with its attractive permutations of colour and ' presentation, has drawn even more collectors to the 'Europa' theme this year, but first a brief history of its origin and development. L'ldee Europeenne The idea of a postal union was conceived in 1955.

Belgium, France, West Germany, Italy, Luxembourg and the Netherlands issued the first 'Europa' stamps in 1956—the uniform motif showed scaffolding around a 'Europa' building. These were the six countries of the European Coal and Steel Community, founded in 1952, and now part of the merged 'European Communities' Commission, the same countries which formed the European Economic Community (EEC, 'Common Market' or The Six') in 1958, and which, at St Moritz, first formed the nucleus of the CEPT.

Switzerland issued 'Europa' stamps in 1957, and in 1959 the new permanent CEPT organisation was created in Montreux, Switzerland, of 19 European countries seeking closer liaison and the improvement of postal and telecommunications services. Great Britain and other member countries issued stamps on the occasion of the CEPT's first anniversary in 1960, most of them featuring the word 'Europa' with an outsize '0 ' in the form of a 19-spoked mailcoach wheel, emblem of the Conference, and the initials 'CEPT', used for the first time, signifying the French version of the Conference title.

The emblem, much admired by le Brocquy, was designed by the Finnish artist, P. Rahikainen; Reynolds Stone completed the design of the British stamps which, incidentally, were Harrison's first GB bicoloured photogravure printed issues. In 1961, about 15 countries issued 'Europa' stamps. The motif was T. Kurperschoek's '19 doves' (forming a single dove in flight), and the British Post Office issued CEPT stamps for the second year running, for the Conference at Torquay.

These, while including the doves, gave special emphasis to the new CEPT symbol —the four letters 'CEPT ' within linked posthorns which, designed by Michael Goaman, was selected from 12 European entries and is still in use today. Other designs have included a capital 'E', the word 'EUROPA' upon a linked chain, the 'Europa' tree, flower and ship, cogwheels and a symbolic key. 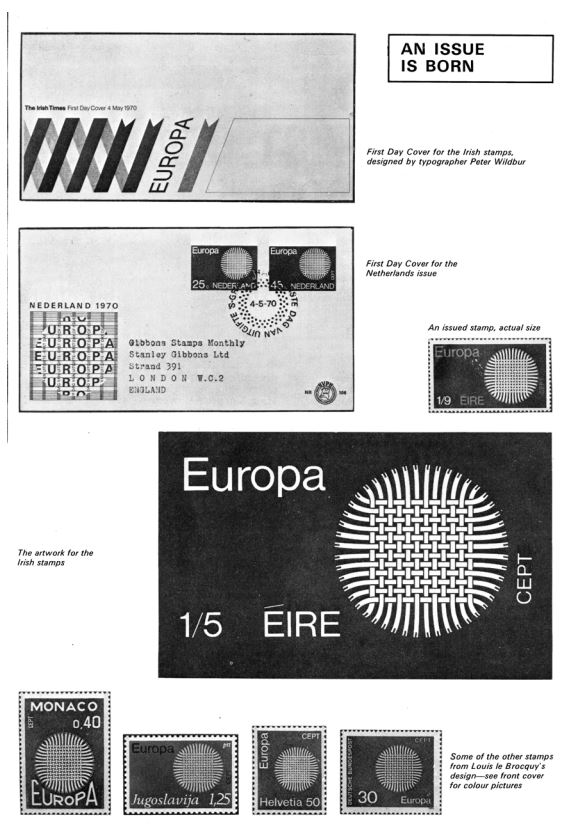 Last year's design, by the Italian artists, Luigi Gasbarra and Giorgio Belli, depicted the letters 'EUROPA ' in the form of a classical colonnade. Le Brocquy's 'Flaming Sun' The successful design for the 1970 'Europa' series was selected from 28 entries in an international competition by the postal administrations of the CEPT at an extraordinary meeting of the 'Posts' Committee, held on 25 January 1968, at the resort of Villars-sur-Ollon, in the Vaud, Switzerland. It comprises a woven fabric in the shape of the sun, symbolising the 'radial nature' ('le caractere rayonnant') of posts and telecommunications, the 24 interlaced fibres representing the co-operation and integration of the 24 (now 26) member countries of the CEPT.

The pattern has affinities with early Celtic design. 'Flaming sun' is, however, our own interpretation of the motif which is symbolism at its most effective—a close weave for unity plus the all-embracing warmth of the sun's rays, an appropriate representation of the aspirations of the CEPT.

We have taken the Irish stamps as our prototype and in close-up the artwork reveals that the 'weave' is a kind of optical illusion, the square centre portion comprising an exercise in rectangles of equal length, placed alternately vertically and horizontally. But le Brocquy, with his experience of graphics and of tapestry (in which coloured threads are passed between fixed warp ones), knew precisely how to achieve the desired effect.

The design has a geometric precision which is attractive in itself, and it is interesting to see and compare the different countries' versions. Some showed the motif in clear white like the Irish 'prototype', others depicted it in colour, Cyprus most attractively, in two colours. San Marino had bright red on green and yellow backgrounds, while Spain had a very close 'weave' in gold which looked rather like the seat of a gilt cane chair!

The typography of the Irish design, with 'Europa' in bold sans-serif capital and lowercase letters, adopted by several other countries, was by Peter Wildbur of BDMW Associates Ltd, London, an artist who has himself designed stamps for Ireland, including the Red Cross Centenary (1963) and Wolfe Tone (1964).

The selected typeface was Helvetica, which is produced by the Haas Company in Switzerland and which has been in use for a number of years with various additions from time to time of weights and condensed and expanded forms. The version used is the roman 'normale' weight with the addition of a drawn accent for 'EIRE'.

Louis's father, Albert le Brocquy, MA, is very well-known in Dublin philatelic circles and contributed valuable advice on aspects of balance and legibility of the 'Europa' design. 'It is odd,' le Brocquy remarks, 'that in this year, 1970, I have produced my smallest work, a postage stamp, and my largest, a 30 sq-metre tapestry now almost completed by Tabard Freres & Soeurs at Aubusson.

It was commissioned by P. J. Carroll and Company of Dundalk for their superb new building which opens in September, and it has taken five expert tapestry weavers six months' full-time work to complete, using 97 coloured wools'.