Sales Executive Ema Sikic explores some of the most beautiful and exotic birds that have graced stamps from around the world.

North Borneo, as its name suggests, is the northern part of the island of Borneo. This particular term refers to the period when the territory used to be a British protectorate from 1888 and a British Crown colony after 1946. North Borneo was a British protectorate under the sovereign North Borneo Chartered Company from 1882-1946. The company issued its own stamps in March 1883, using a design incorporating the coat of arms (a dhow and a lion), inscribed ‘NORTH BORNEO’, and with the value written in English, Jawi and Chinese.

Stamps of North Borneo boast a wealth of animal species depicted, with different varieties featuring a sun bear, orangutan, rhinoceros, great argus pheasant among others. The quaintest among these are stamps with the palm cockatoo, a smoky dark grey or black bird, with a large black beak and red cheek patches. 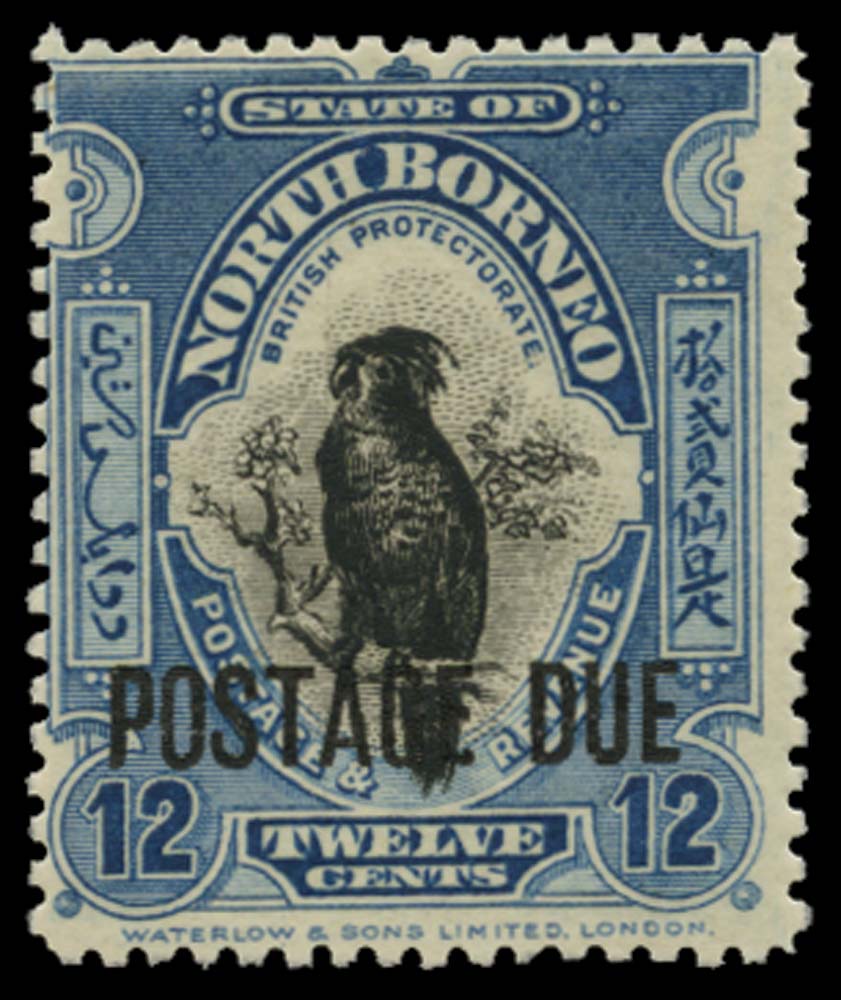 This bird appears in two stylistic renditions on stamps, first in this deep blue and black 12c stamp (pictured above), with finely engraved detailed feathers, first issued in 1909. This rendition of the palm cockatoo on this stamp denomination remained in use until the 1930s. 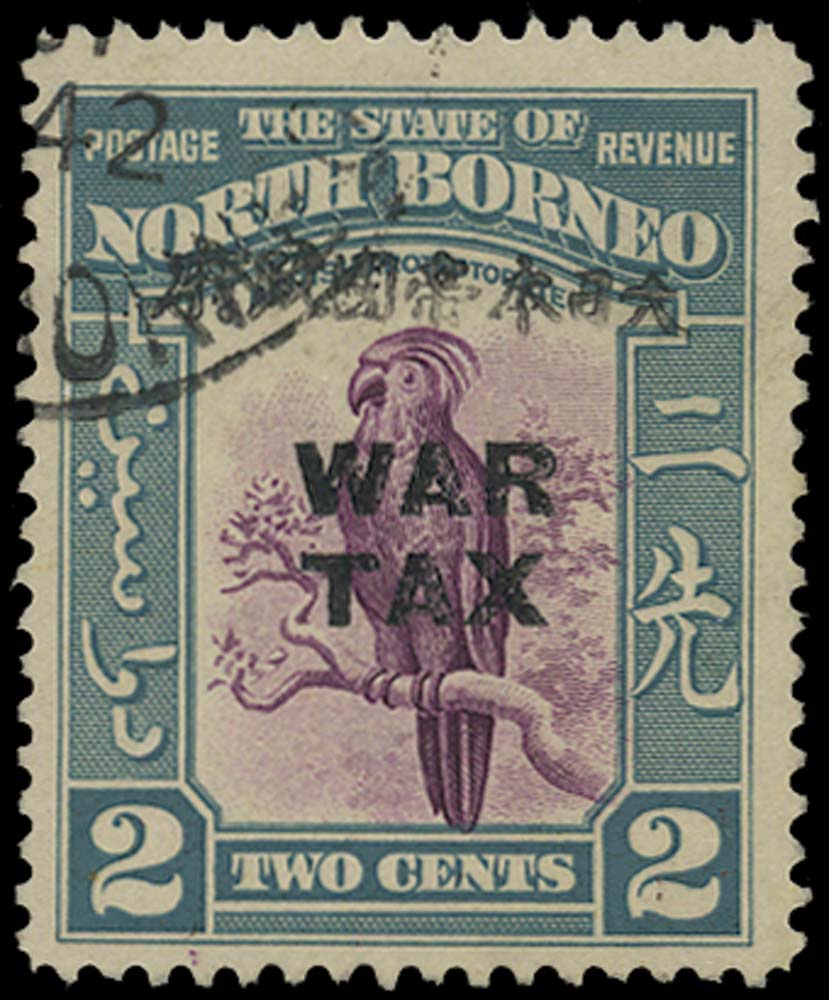 In 1939, the bird appears in its second rendition on a definitive stamp, somewhat stylistically simplified in a new colour scheme of purple and greenish-blue on 2c stamps (pictured above). Its crest is now perfectly ‘coiffed’, and the feathers are designated with simplistic linework, the tail feathers are larger and neater. In 1942, North Borneo was occupied by Japanese forces. During the occupation, overprinted stamps of North Borneo and Japan were used.

Before 1914 under colonial division, the island of New Guinea was under the control of the German Empire in the North and used its stamps between 1888 and 1897. New Guinea got stamps bearing its name after 1897. After the Australian occupation in 1914, the remaining German stamps and some Australian ones were overprinted. After the Territory of New Guinea became a League of Nations mandate entrusted to Australia in 1925, the country organised the postal system and philatelic production in New Guinea.

The bird of paradise series first appears in August 1931 with dates 1921/1931 commemorating the tenth anniversary of Australian mandate over the territory. The same day, the airmail overprinted series was put on sale. In June 1932, the stamps were issued again, this time without the commemorative dates (pictured above).

Most of this bird species are found in Papua New Guinea and eastern Australia. These birds are best known for their lavish elongated plumage, extending from the beak, wings, tail or head. Societies of New Guinea have often used the plumes in their dress and rituals, and the plumes also proved very popular for ladies’ millinery in past centuries in Europe. Unfortunately, the beautiful plumage birds of paradise are famous for led to excessive hunting – they are an endangered species.

A long-standing symbol of the country, a beloved animal and a colloquial word for New Zealanders is the Kiwi. Kiwis are endemic to New Zealand, small flightless birds of rotund disposition, they are the absolute icons of New Zealand, so it is not surprising they found their way on national stamps. Postage stamps have been issued in New Zealand since 1855 with the ‘Chalon head’ stamps featuring Queen Victoria. These were replaced in 1874 with the so-called ‘sideface’ stamps, also depicting Queen Victoria. 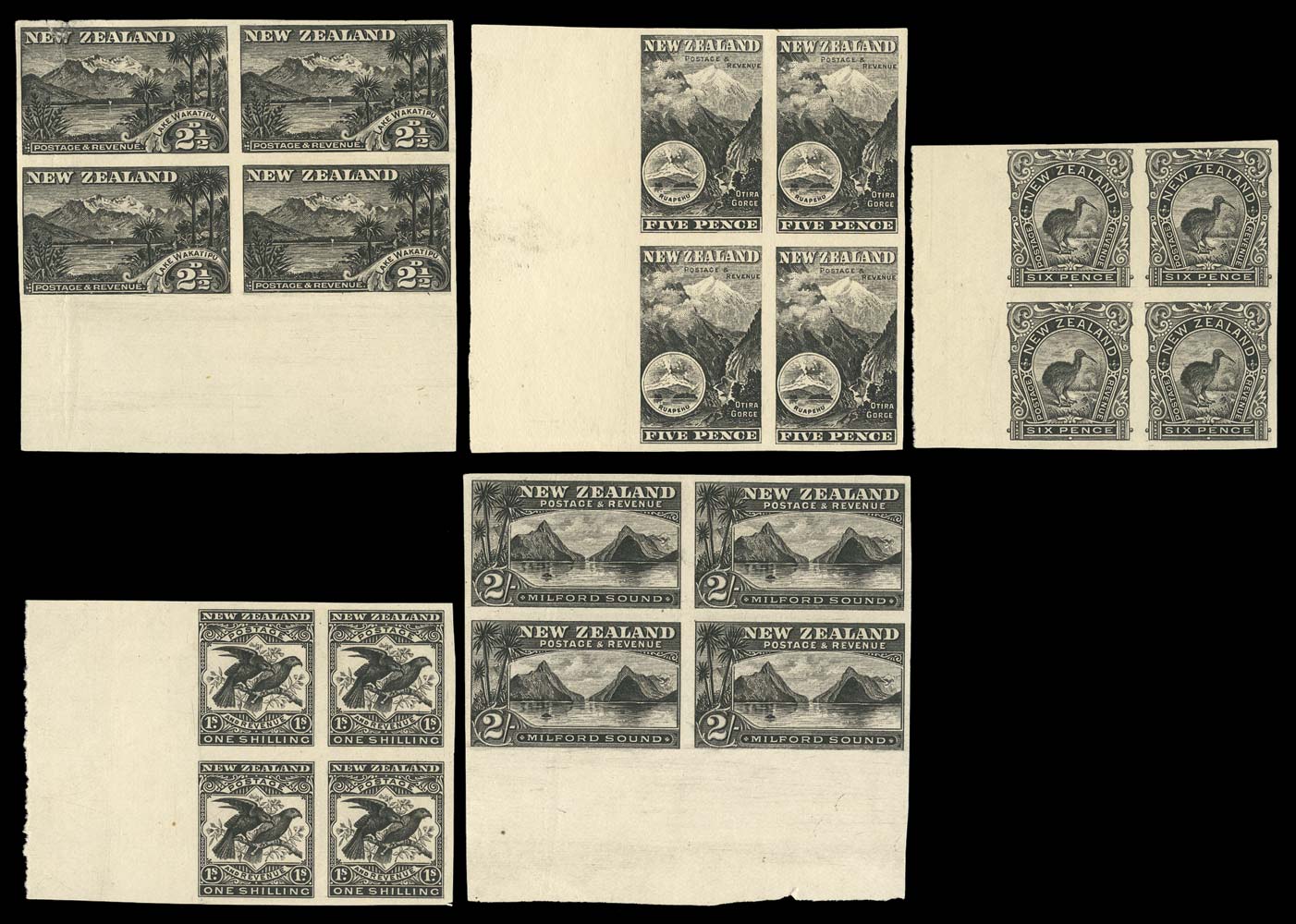 At the very end of the 19th century, first pictorial stamps of New Zealand were created featuring spectacular landscapes and indigenous birds - proofs of these stamps pictured above. The first Kiwi stamps make their appearance on 6d stamps in green colour. 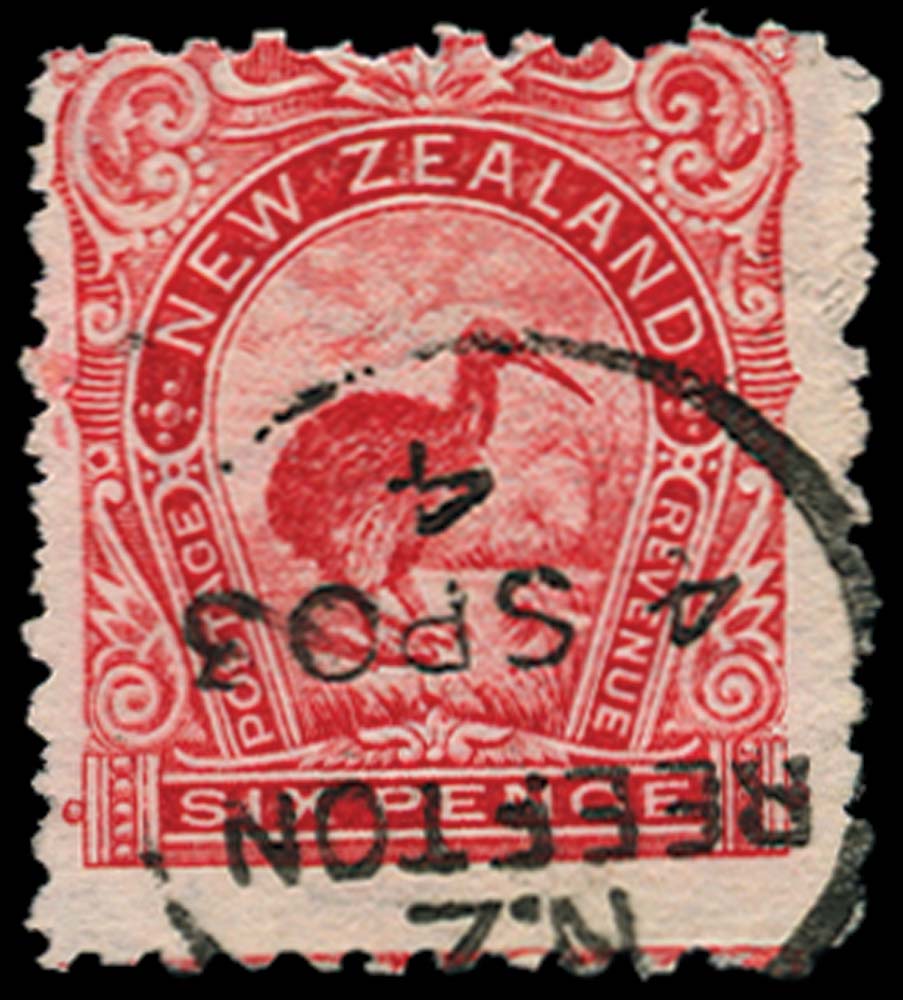 In May 1900, a little more than a year after first Kiwi stamps were printed, their colour was changed to rose-red (pictured). The Kiwi design remained the same as in the original 1898 issue, but it had to be printed in red because the Universal Postal Union required halfpenny stamps to be printed green. This makes the green 6d Kiwis scarcer today.

By 1906 the 1/2d, 3d, 6d and 1s pictorial stamp printing plates needed to be replaced. The designs were simplified and sizes of the 3d, 6d and 1s stamps were reduced making them the same size as the 1d value.

A slightly different entry on this list that features fifteen different birds on stamps is also the most modern one, coming from the Falkland Islands. The Falkland Islands are known for their stunning biodiversity and numerous bird species. Land birds make up most of the Falklands' avifauna; with as many as sixty-three species breed on the islands, including sixteen endemic species. 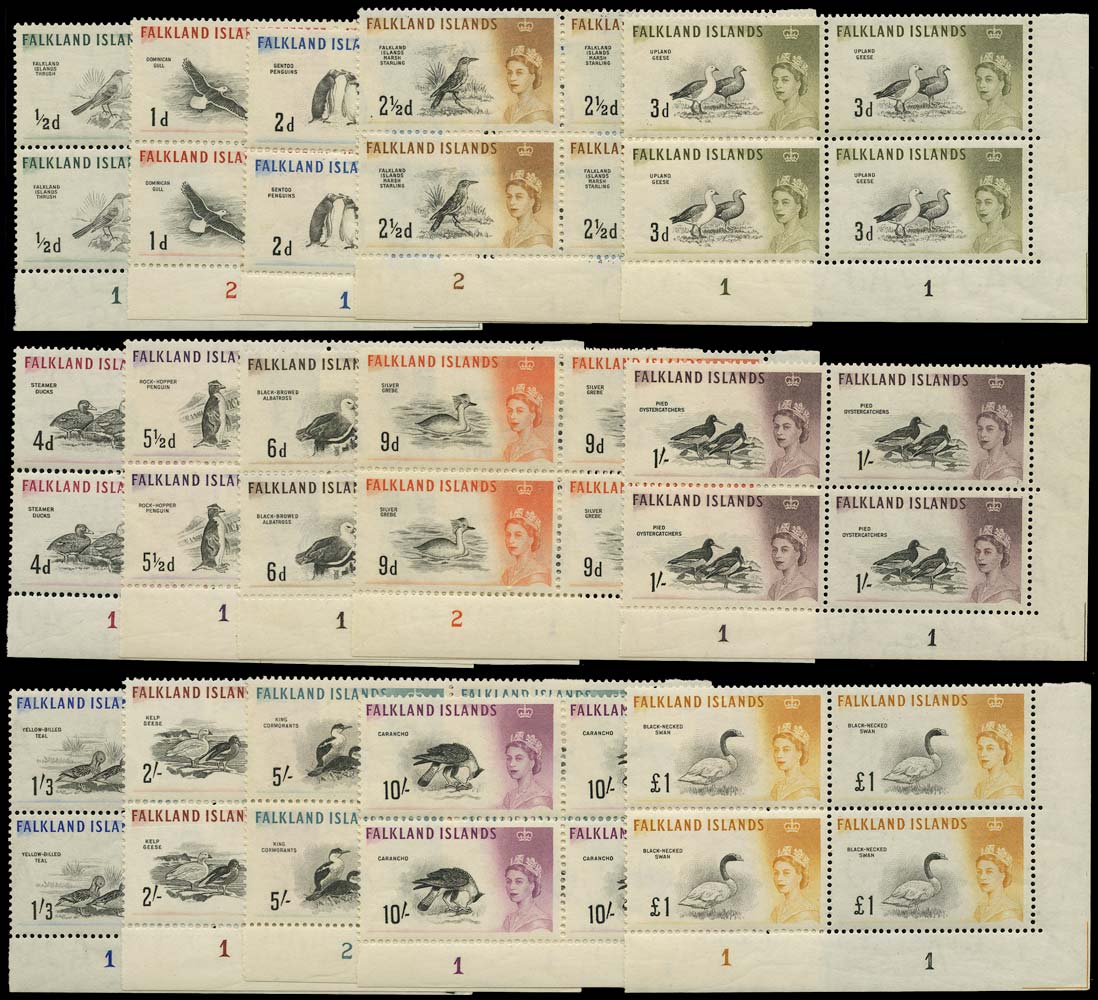 Executed in a minimalistic manner, 1960 Birds Set features simple black line drawings of birds on a plain white background. Each species is named in English, flanked by Queen’s portrait on the right which is highlighted in different colours depending on denomination. While the most lovable and recognized animal on Falkland Islands stamps (and philately in general) is the 1933 Centenary 5s Gentoo penguin stamp that we covered already in Dispatches, the 1960 set with 15 native bird varieties is an ornithologist’s dream and a more affordable choice for a thematic collector.

Among others, the set features the Gentoo penguin too on the 2d stamp. Falklands are the home to some of the largest albatross colonies in the world, hence the black-browed albatross is featured on the 6d stamp.

Other notable birds include Southern rockhopper penguin on 5½d stamp, Magellanic oystercatcher on 1s stamp and the famous bird of prey – the southern crested caracara - on 10s stamp. Birds that are native to South America, such as the yellow-billed teal, King cormorant and black-necked swan, appear on 1s3d, 5s and £1 stamps in this set.

While this is only a brief overview, dedicated bird lovers are welcome to browse Theme Birds on Stamps by Kjell Scharning that lists over 30,000 stamps with bird names in English and Latin.