The Union of South Africa was established in 1910, joining together the former British colonies of Cape of Good Hope, Natal, Orange Free State and Transvaal. A stamp to commemorate the opening of the new Union Parliament was issued in November of that year, but it wasn't until 1913 that a new set of definitive stamps, inscribed with the name of the new country, was made available.

In the interim, stamps of the four former colonies continued to be used throughout the nation. This period is known as the “Interprovincial Period” and is a very collectable field in its own right.

Interestingly, the stamps of 1910 and 1913 were not the first to be inscribed “South Africa”; that distinction falls to the stamps of the British South Africa Company, which included the name in their issues for the territories of Rhodesia from 1892 to 1924.

In 1926, a new series of pictorial definitive stamps was issued and would remain in use until 1954. The three values issued in 1926 – ½d Springbok, 1d “Dromedaris”, 6d Orange Tree – were the first to be printed in the now-famous “bilingual pairs” format. 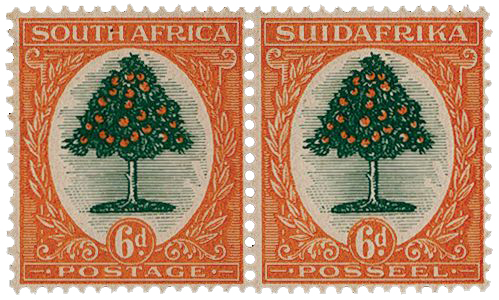 The stamps in each sheet were inscribed alternatively in English and Afrikaans, the two official languages of South Africa at that time. Although pre-printed albums tend to only have spaces for horizontal pairs, collecting these stamps as blocks of 4 gives a much clearer picture of how the two languages alternated on the stamps. 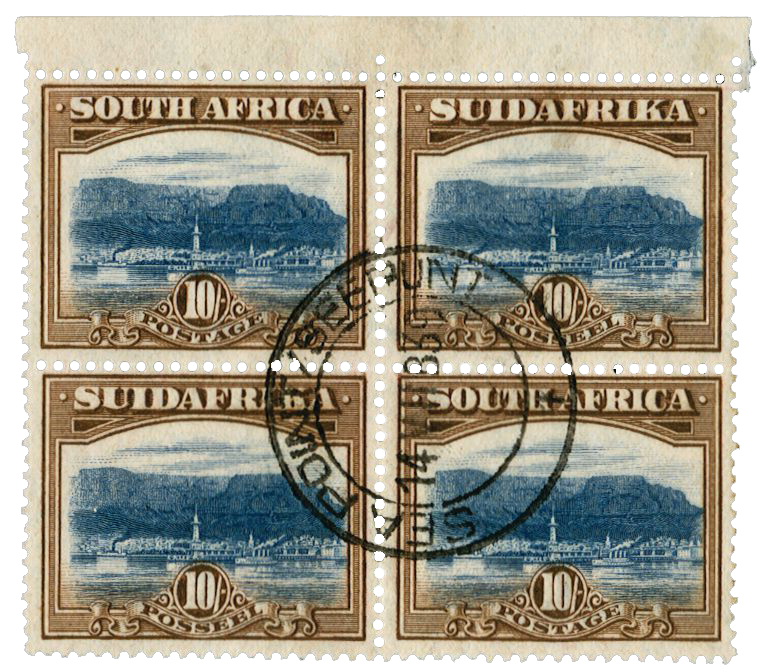 Technically, South Africa's first commemorative stamp was that issued in 1910 for the opening of the Union Parliament, and it remained the only such stamp until 1933 when stamps were issued to raise funds for the building of the Voortrekker Monument in Pretoria. 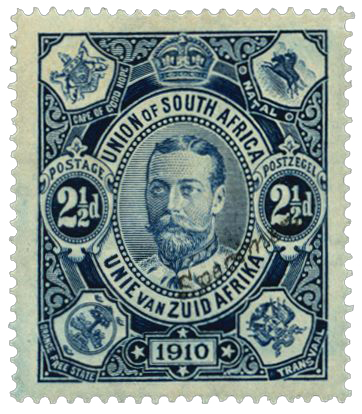 The Second World War was the impetus for another well-known South African stamp format, the so-called “bantams”. In 1941 a set of stamps was issued to publicise the War Effort. Between 1942 and 1944 these stamps were reprinted in a much smaller format, between half and one third the size of the previously issued stamps, hence the nickname “bantam”. 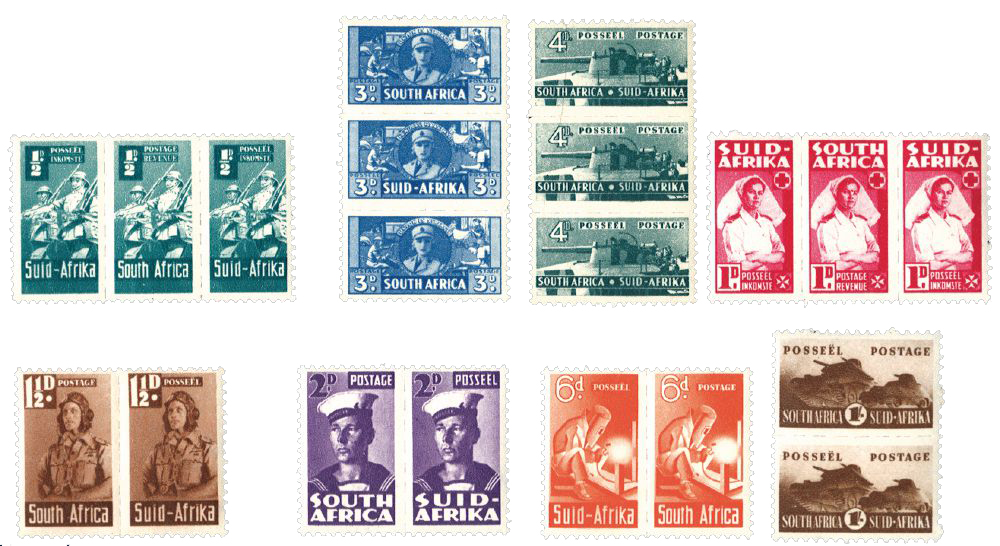 Although still utilising the by now familiar bilingual pairs format, each unit of either two or three stamps was subdivided by means of roulettes, rather than the more normal perforations.

After the end of the Second World War, the push for full independence from Great Britain intensified. This was achieved in 1961 when the Union of South Africa became the Republic of South Africa. Along with a change of name, there was also a change of currency.

The change of currency took place in February, which resulted in a stop-gap measure of several previously issued stamps being reprinted in the new currency. Stamps inscribed with the new name and currency were ready to be issued on the first day of independence, 31 May 1961, although the bilingual pairs format was no longer in use, with each stamp being inscribed in both English and Afrikaans. 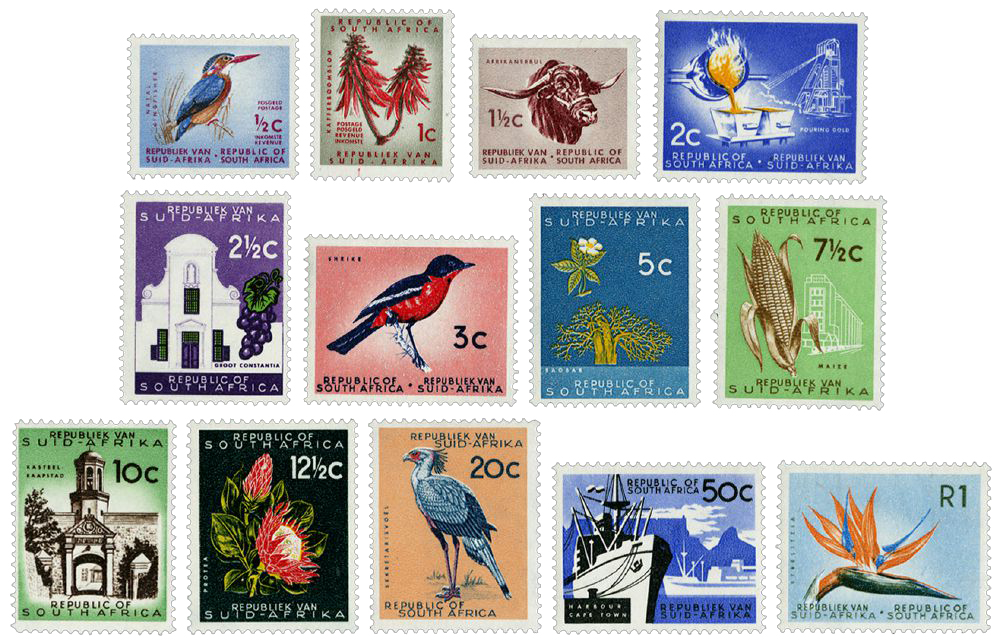 South Africa issued many attractive and interesting stamps throughout the 1970s and 1980s, including what is arguably the country's most (in)famous stamp, the withdrawn “Word of God” 40c stamp from 1987. 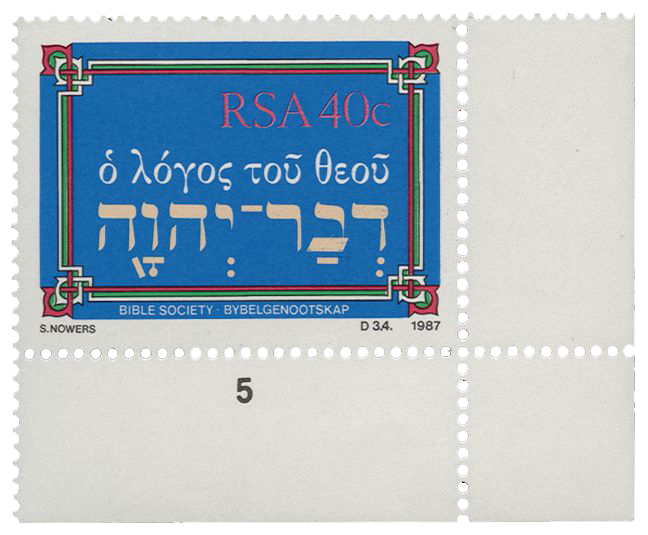 This stamp was to have been released as part of a set of four commemorating the Bible Society of South Africa, but was withdrawn after objections to the use of the Hebrew word for “God”. Nevertheless, a number of examples were sold at smaller post offices on the day of issue before notification of the withdrawal was received.