The purpose of the sitting was to produce portraits of the Queen, which could be used on the first coins, banknotes and stamps of the reign. You can view the official portrait here.

The photograph depicts the Queen wearing the State Diadem made for King George IV in the 1820s, the very same piece of Royal jewellery that adorns her on the Penny Black stamps of 1840.

The ‘Wilding’ issues were in use from 1952 to 1967. Often at the forefront of technology, they were the first British stamps to feature graphite lines and phosphor bands. Both these innovations were developed for automatic letter sorting. Although graphite lines fell by the wayside, the use of phosphor ink remains the primary source for letter sorting to this day.

In combination with the ‘Wilding’ portrait 75 different frame designs were considered, these were eventually whittled down to one from each of the following five designers, Edmund Dulac, Enid Marx, Mary Adshead, Michael Farrar-Bell and George Knipe. All five included four flowers to symbolize each country within the Union, a rose for England, a shamrock for Northern Ireland, a thistle for Scotland and a daffodil for Wales.

With three different watermarks, graphite lines, phosphor bands, booklets, coils and a host of minor flaws and varieties there is plenty to interest the collector in the ‘Wilding’ series.

In a letter to the Post Office in April 1961, designers Michael Goaman and Faith Jacques expressed the difficulty of including the large Wilding portrait in their designs for commemorative stamps. In 1963, comparing the Wilding portrait with Jacques' proposed design, the Stamp Advisory Committee acknowledged the need for a replacement. In 1967 it was decided that the ‘Wilding’ series be phased out and replaced by a new series of definitives which are known today as the ‘Machins’.

Designed by British sculptor Arnold Machin, they consist simply of a sculpted profile of the Queen portrait and a denomination and are almost always in a single solid colour. Working from supplied photographs, Machin's method was to sculpt a bas-relief portrait in clay, which he then reworked further as required. With moulds taken a plaster relief was made that could be photographed to produce a multi positive that was then combined with a second multi positive of the face value.

Original sculpture used in the making of the Machin series, on display at the Postal Museum in London. Photo: Wikimedia Commons

Early attempts retained the frames and flowers, however, these were soon dropped in favour of a simpler design. Original versions also depicted the Queen wearing a tiara, this again was quickly changed in favour of the previously used State diadem.

From a philatelic point of view, the Machins are considerably more complex than their minimalistic appearance suggests.

This long-running series has seen thousand of variations of colour, gum, phosphor banding, iridescent overprints, perforations and printing methods. Since they were issued pre-decimalisation, they also exist in both old and new currencies. For the dedicated collector, they offer an ongoing, rich field of collecting.

Commemorative stamps were issued in 1924 for the first time; however, they rose in popularity during the early reign of Queen Elizabeth II in the 1950s and 1960s. Commemoratives of this period with their simplistic designs and a very conservative stamp-issuing policy by the Post Office made these issues popular with collectors. Between 1952 and 1964, there were only 20 commemorative sets issued and unlike definitive stamps that are often in use over many years, commemorative stamps are printed in limited quantities and on sale for only a relatively short period of time. 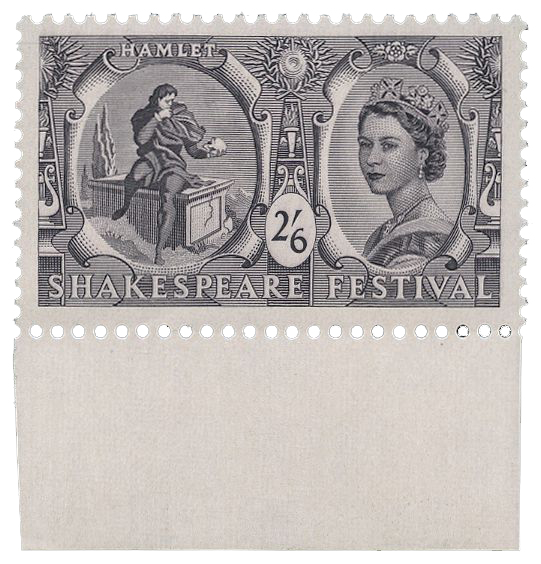 In 1965, following the previously highlighted problems with the Wilding portrait, new criteria were issued for what could appear on stamps by the then Postmaster General, Tony Benn. A small silhouette of the Queen’s head was chosen based on the effigy designed by the sculptor Mary Gillick.

This has become the standard for commemorative stamps to this day. Since 1966 commemorative stamps have proliferated, as well as the richness of designs and the colourful themes, which they commemorate. If you are thinking of starting your Queen Elizabeth II stamp collection, this is a very easy starting point.