During the Franco-Prussian war (Sept 1870 - Jan 1871) the city of Paris was under siege. Messages were not getting through to the outside world as telegraph lines were being cut and couriers captured and, in some cases, killed. To overcome this problem an ingenious solution was proposed. The Minister of Posts, having seen a number of balloon aviators marooned in the besieged city, suggested trying “ballon monte” (manned balloon flight) and taking the service to the airways!

These balloons were mainly constructed in the unused Paris train stations of Gare du Nord and Gare d’Orleans. The size and height of the stations allowed the cotton fabric balloons to be hung up, inflated and checked for leaks before their one-way flight out of the city. 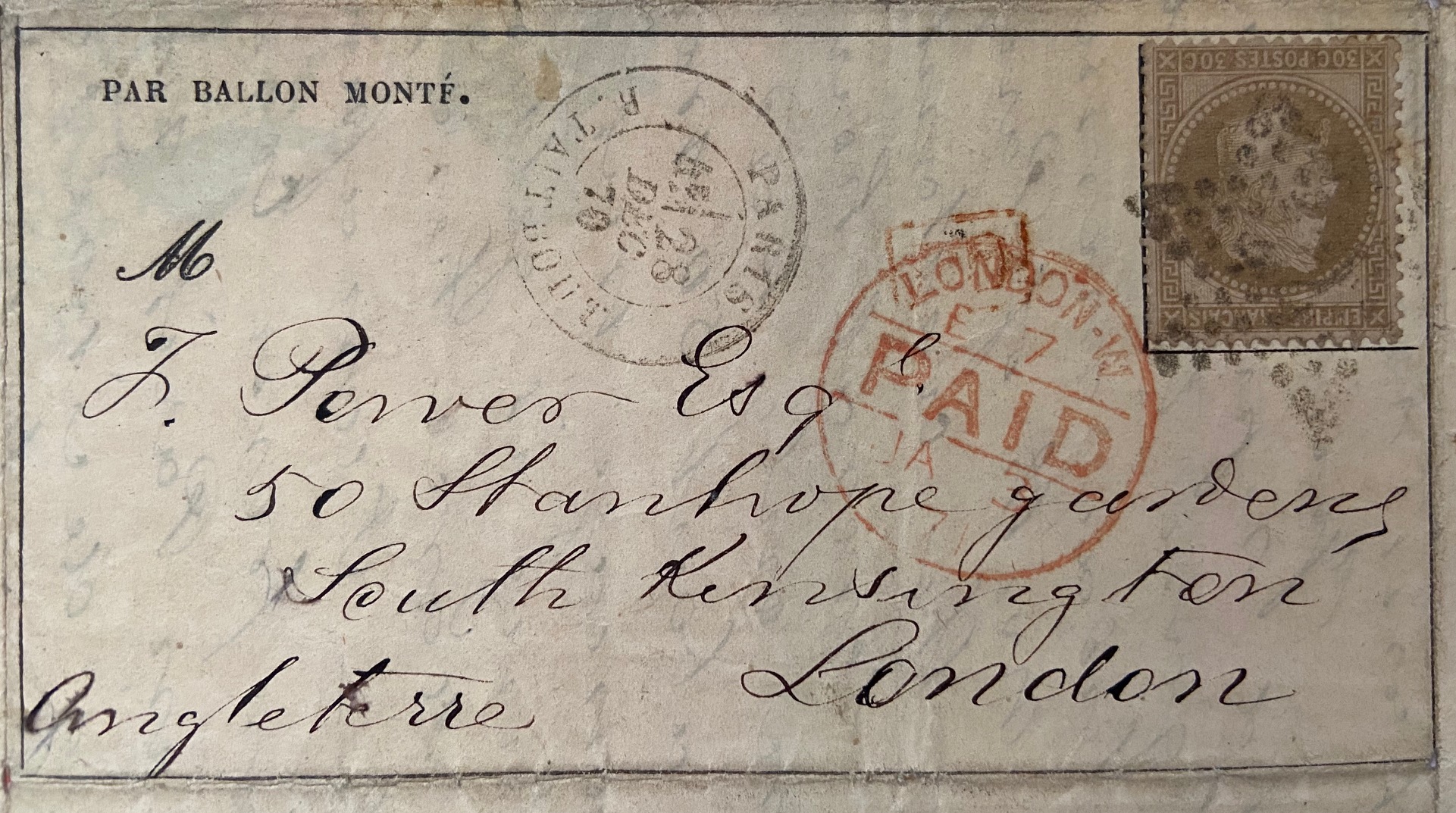 The envelope pictured was carried on ‘Le Bayard’ the 51st balloon to depart from Paris. It left the Gare d’Orleans at 4 am on Thursday 29th December 1870. Piloted by Paul Réginence (on behalf of the “Administration des Postes”) and accompanied by one passenger, Monsieur Ducoux, and four carrier pigeons whose names remain a mystery?

It was a treacherous flight that came close to ending rather prematurely in the Atlantic Sea on more than one occasion. The Balloon eventually touched down successfully near La Mothe-Archard, 377km from its starting point. This particular letter eventually completed its eventful journey and arrived in London on Jan 3 1871 - this item is now destined to be a lot in the Stanley Gibbons Auction House. 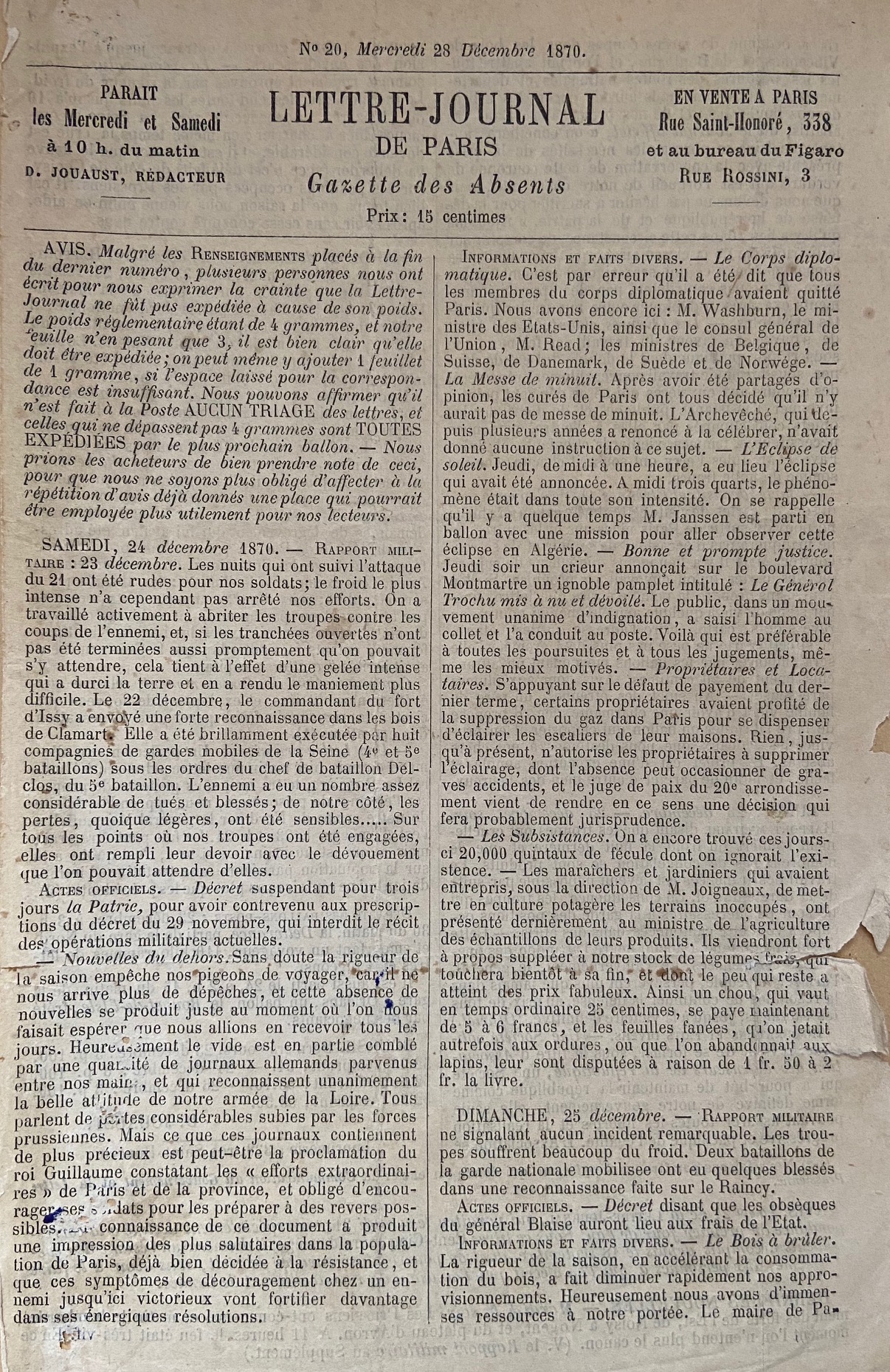 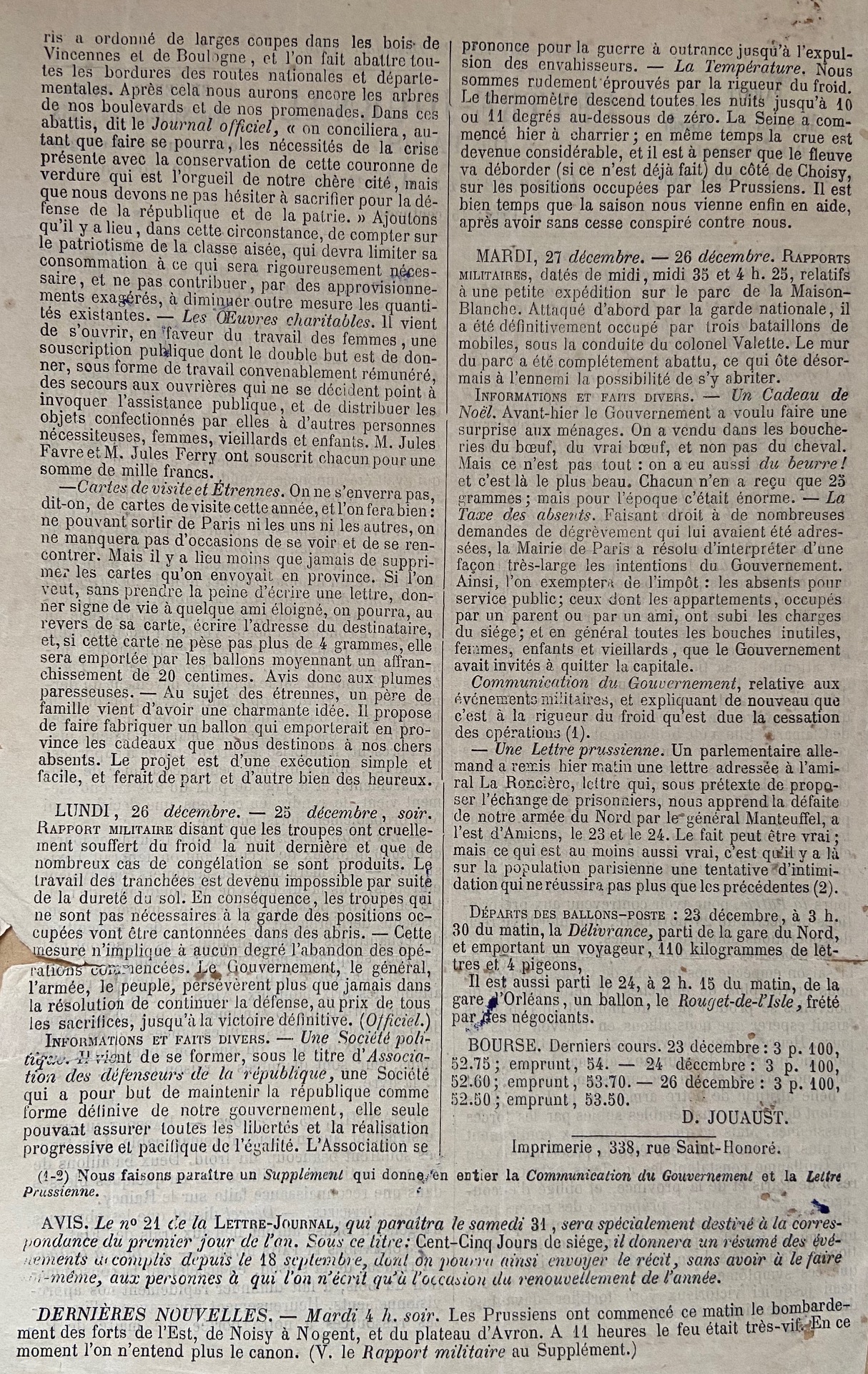 In all, 66 manned flights departed from the city with a pilot and passenger allowing 160 people (and approximately 380 carrier pigeons) to escape and around 3 million items of mail to be delivered - with the majority reaching their goal. Around 60 of the winged passengers actually returned to the city carrying messages and plans on microfilm.

The average flight distance was approximately 180 miles with most landing in France or neighbouring Belgium. Not everything went to plan however as one unfortunate crew accidentally landed in the middle of Munich -where its occupants were swiftly captured and imprisoned – whilst another ended up in Norway, ditching in the sea and then being rescued boat, after a staggering journey of over 1000 miles!

This really is a fascinating area of philately to collect as there are many unusual destinations that this type of delivery allowed mail to be sent to including Cape of Good Hope, Malaya, Mauritius, Japan and Panama to name just a few - pictured here are three to these unusual destinations. 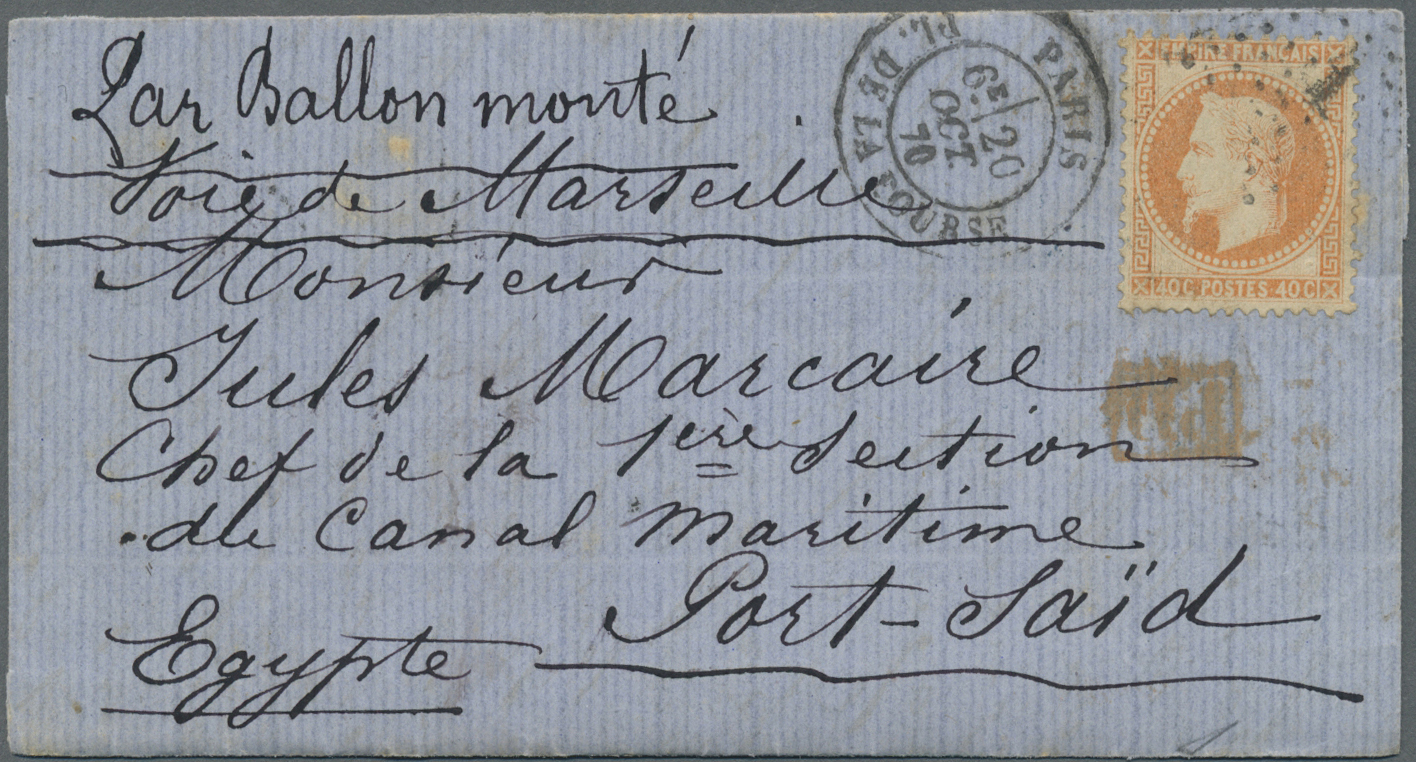 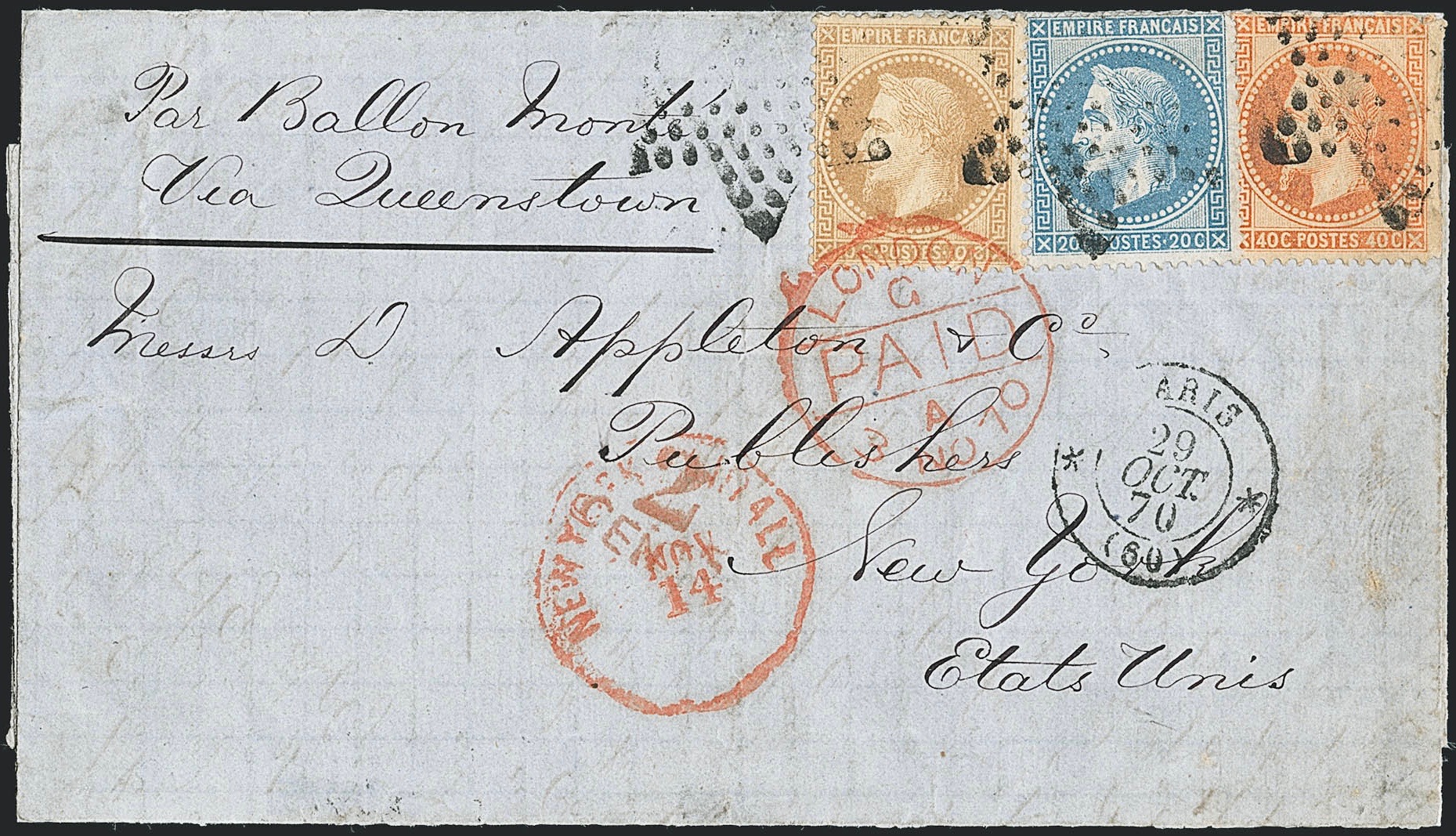 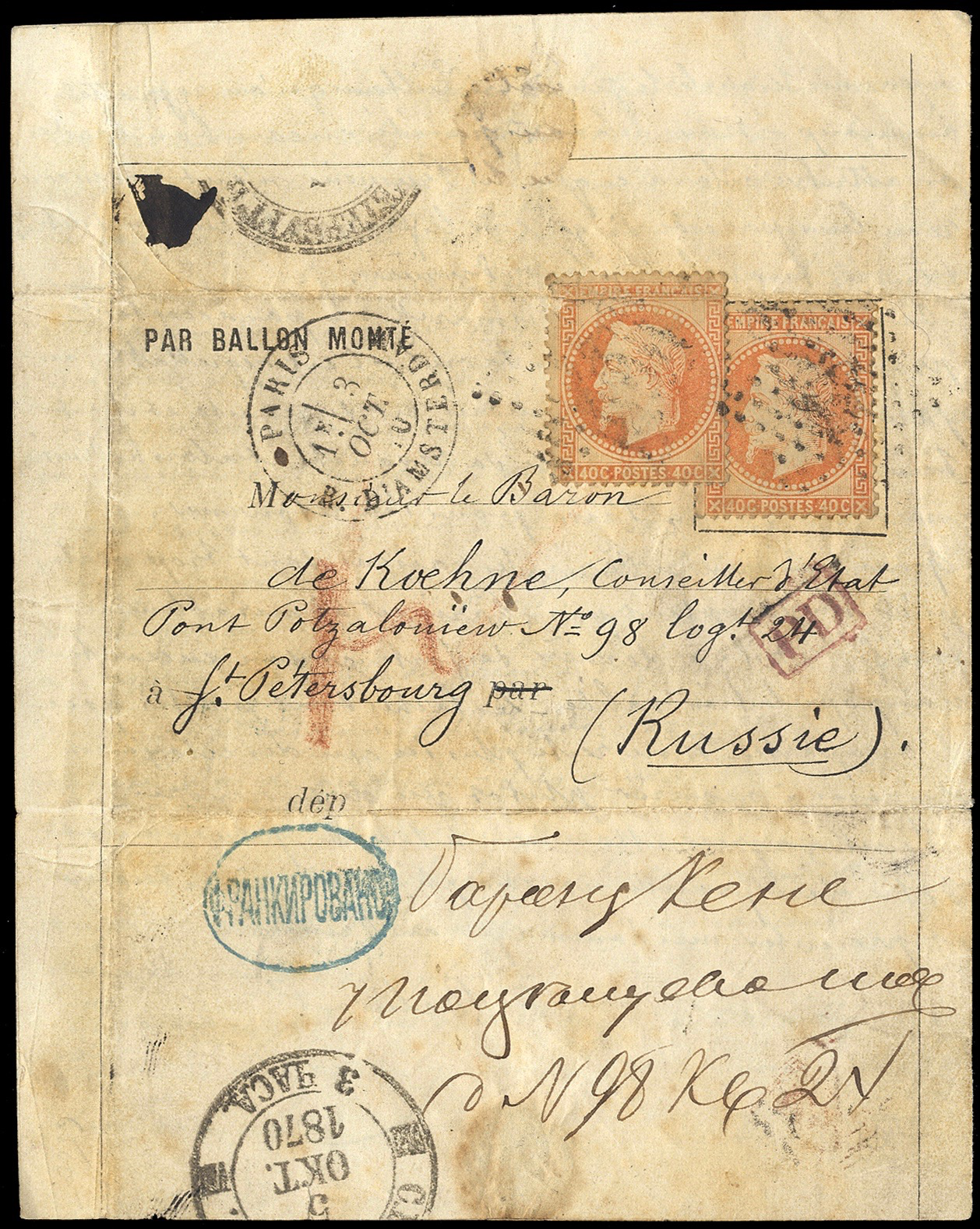